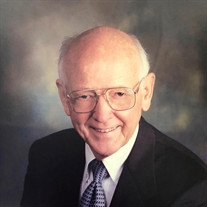 Paul L. Moffitt – Servant Leader An exemplary servant leader of family, community and business, Paul L. Moffitt, covered by prayer and love from family and friends, peacefully left this world to spend eternity with his Savior on December 12, 2018, at the age of 91. Though a devoted resident of the Rio Grande Valley for 72 years, Paul (Dad or PawPaw to his family) was born in Iowa where he learned the value of hard work, stewardship, and attention to detail, working on his family’s farm during the challenging years of the Great Depression. Paul truly lived a life of waking early to milk cows and walking to school in the snow, building character that would one day aid in building up others. Paul moved to McAllen, to which his family had relocated, after serving in the US Navy during World War II and found his greatest blessing in his bride, Marilyn Crawford. After graduating from Southern Methodist University with a BBA, Paul and Marilyn returned to McAllen, married, started a family of three children, and lived in the same home, which he designed and built, for over 65 years. Paul’s contributions to the Valley began in commercial and residential construction as a partner in W.E. Crawford Co. In this capacity, Paul gained a clear vision of the Valley’s foundation as a community and platform for border commerce. He served on the board of Valley Federal Savings and advised the financial growth engine for the Valley, while also sustaining a full career in construction. In 1984, he then transitioned to a second career of shepherding the Valley’s development as an Executive Vice-President of the bank, continuing service to the bank as a member of the Board of Directors under the IBC flag until the end. Apparent to his family was the mutual respect and love that Paul shared with his coworkers and business partners; he joyfully and sincerely would mentor and share with all whom he worked and partnered. Selfless and intentional, Paul served the Valley in so many ways. His keen interest in providing jobs for local residents fueled his desire to start and chair the first McAllen Economic Board with the Chamber of Commerce. He served on and led, as president, the McAllen Industrial Foundation and Industrial Development Authority, and his dedication to the development of the McAllen Trade Zone was memorialized with a building named in Paul’s honor. Unyielding and committed, he devoted time to the community in impactful ways, serving on boards and committees to strengthen public infrastructure, museums, education, children’s health and relief of poverty, including Chair of the McAllen Bridge Board. In recognition of his selfless hours of community service, he was named McAllen’s Outstanding Man of the Year, and received the Volunteer Industrial Development Award from the State of Texas Industrial Council. Though devoted to community development, Paul prioritized dedication to Christian fellowship, serving as an active member and servant of the First United Methodist Church in McAllen. Whether leading the development of church facilities or teaching in Bible Study, he earnestly sought wisdom from the Lord, which he applied throughout all aspects of life. He was honored to be named Layperson of the Year by his church. Paul also spent time as a volunteer for the Boy Scouts, assisting his sons in attaining the rank of Eagle Scout and bestowing unto other young men the spirit of selfless service. His election into the Boy Scouts’ Order of the Arrow best summarizes his life of servant leadership as it honors those who ‘crystallize the habit of helpfulness into a life purpose of leadership in cheerful service to others.’ A devoted and supportive husband, father and grandfather, PawPaw did not simply just show up. He delivered his full attention to you and made his family and friends feel valued. Whether wood working something for others, attending numerous sporting events in support of family, hunting with friends, or gifting his annual crop of citrus, PawPaw set an example in his personal life as well as his professional life. He modeled what God asks us to do in Proverbs 3: 21-22: ‘My son, do not let wisdom and understanding out of your sight, preserve sound judgment and discretion; they will be life for you, an ornament to grace your neck.’ Paul’s wisdom, understanding, integrity, and sound judgment will forever strengthen the Valley, his friendships, and undoubtedly, his family. Paul is survived by his treasured wife, Marilyn, and their devoted children, William Perry (Michelle), Don (Sidney), and Jacquelyn. Influenced by their grandfather in so many great ways are Austin (Sarah), Barron, William (Alexandria), Luke, Kathryn, Matthew, Robert, and Isabel. Also blessed with Paul’s love, wisdom and sincere attention, are his great-grandchildren, Crawford, Mary Beth, and Abigail. A Celebration of Life honoring Paul will be held at 10:30 a.m. on Saturday, December 29, 2018, at First United Methodist Church, 4200 N. McColl Road, McAllen, Texas. In lieu of flowers, friends are asked to please consider a memorial honoring Paul’s memory, gifted to the: First United Methodist Church Building Fund, 4200 N. McColl Road, McAllen, Texas 78504, The Museum of South Texas History, 200 North Closner Blvd., Edinburg, Texas 78541, or the charity of your choice.

The family of Paul L. Moffitt created this Life Tributes page to make it easy to share your memories.