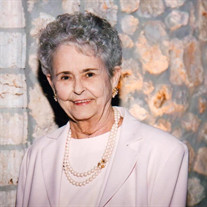 Patsy Lee Wilhelmi Davis died Saturday, April 7, 2018, at Amara Hospice. She was born April 9, 1930 in Joliet, IL., to Roy and Betty Dames Wilhelmi. Her mother and she moved to the Rio Grande Valley in 1932 and settled in San Benito, TX. She graduated from Harlingen High School, attended Brownsville Junior College and The Hockaday School, in Dallas. She returned to Harlingen, where she met the love of her life, Challis Davis. He and her parents preceded her in death. After she and Challis were married in 1951 they lived in San Benito until 1966. She was very involved in the community. In 1966 they then moved to McAllen. Patsy volunteered at the children's classrooms and always provided desserts for the school functions. After school, the kids gathered in her kitchen to visit with her and eat her goodies! She always had cookies or other desserts ready. You could always count on Patsy bringing her delicious pies to many family gatherings which were legendary! She and the family were big game players, and got together every weekend to play. After learning how to play MahJong, it became a passion for her. There was a foursome who played weekly. Other hobbies were playing bridge, canasta, and other card games. Needlepoint was also a true talent of hers; she left many completed canvases for her family to enjoy. Her great grandchildren each received a needlepoint Christmas stocking with their names, made and given with much love. The finished product was stunning and heartfelt. She and Challis were members of the First United Methodist Church. She is survived by her children, Debbie Griffith of Round Rock, TX., Chip Davis of Oceanside, CA, Dru LaMantia of McAllen, TX., and Chris Davis of Taipei, Taiwan; 11 grandchildren and 9 great grandchildren. Visitation with the family will be from 5 to 7 p.m. Friday, April 20 at Kreidler Funeral Home at 314 N. 10th St., McAllen, TX. Graveside services will be at 2:30 p.m. on Saturday, April 21, 2018, at Valley Memorial Gardens, 3605 N. Taylor Rd., Mission, TX., 78573. Serving as pallbearers are her grandsons: Gregory LaMantia, Jr., Michael LaMantia, Nicholas LaMantia, Zachary Davis, Collin Griffith, Neil Davis, Patrick Davis and Alex Davis. Memorial Contributions may be made to the Boys and Girls Club of McAllen, 2620 Galveston Ave, McAllen, TX 78501; Laurie P Andrews PAWS Center, 2451 N US Expressway 281, Edinburg, TX 78541; or Vannie Cook, Jr., Cancer Foundation, 101 West Expressway 83, McAllen, TX 78503, or a favorite.

Patsy Lee Wilhelmi Davis died Saturday, April 7, 2018, at Amara Hospice. She was born April 9, 1930 in Joliet, IL., to Roy and Betty Dames Wilhelmi. Her mother and she moved to the Rio Grande Valley in 1932 and settled in San Benito, TX. She... View Obituary & Service Information

The family of Patsy Lee Wilhelmi Davis created this Life Tributes page to make it easy to share your memories.