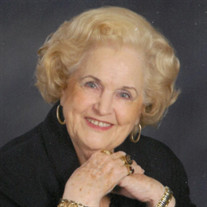 Devoted wife, loving mother, and “Biddy,” Patricia (Patty) Ogden Dickerson passed away on October 14, 2017 at the age of 92 in McAllen, Texas. Patty was born in San Benito to Ernest E. and Agnes Chatelle Griffin Ogden. She is preceded in death by her parents; her husband of 49 years, Frank E. Dickerson; one brother, George O. Griffin; two sisters, Mary Catherine Zimmerman and Doris Bush; and one granddaughter, Page Hagemann. She is survived by her 5 children, Chatelle Bush (Dennis), Jane Jansen (Danny), Peggy Chandler (Kirk), Mark Dickerson (Helen), and Bill Dickerson (Debbie); 14 grandchildren, Amy Bush (John Milton), Allison Bush Kane (Ryan), Mark Bush (Jessica), Trey Jansen, Peggy Jansen, Matt Chandler, Allison Chandler, Evan Dickerson (Courtney), M. Griffin Dickerson (Marissa), Jill Dickerson Bason (Patrick), Patrick Callen Dickerson (Catherine), Jordan Dickerson Angiel (Doug), Zachary Dickerson, and James Petroski (Alexandria); and 16 great grandchildren. She is also survived by many nieces and nephews whom she loved dearly. Patty grew up in San Benito where she began to dance and perform as soon as she could walk, with her favorite cousins, Jimmy and Gerry Chatelle. She graduated from San Benito High School. In 1948, she married Frank, and they settled in Raymondville where she opened the Patty Dickerson School of Dance, sharing her love of dance for more than 20 years. Not only were her students asked to perform throughout the Valley, they were often guest performers on the local Ty Cobb television show. Her passions were dancing and painting. She had many interests but especially enjoyed playing Bridge and Mahjong, and she was an active member in Beta Sigma Phi, P.E.O., Pocos Locos Readers Theater, St. Anthony’s Catholic Church in Raymondville, and Our Lady of Sorrows Catholic Church in McAllen. The Family would like to acknowledge and thank Marta Cervantes for 44 years of dedication to Frank and Patty. Thanks also to the staff from Amara Hospice, as well as Presidente Home Health, especially Martha, Susanna, Maria, and Edith, for their loving care for Patty. Visitation will be held at Kreidler Funeral Home on Wednesday, October 18, 2017 from 5:00pm to 7:00pm, followed by a Rosary. The Funeral Mass will be held on Thursday, October 19, 2017 at 10:00am at Our Lady of Sorrows Catholic Church Chapel. Interment will follow at Roselawn Cemetery. In lieu of flowers, the family requests that donations be made in memory of Patty to Our Lady of Sorrows Catholic Church, or to a charity of your choosing.

Devoted wife, loving mother, and &#8220;Biddy,&#8221; Patricia (Patty) Ogden Dickerson passed away on October 14, 2017 at the age of 92 in McAllen, Texas. Patty was born in San Benito to Ernest E. and Agnes Chatelle Griffin Ogden. She is preceded... View Obituary & Service Information

The family of Patricia "Patty" Ogden Dickerson created this Life Tributes page to make it easy to share your memories.