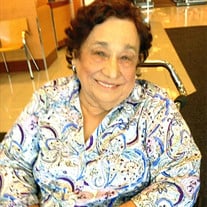 Ofelia Molina, of McAllen TX, passed away peacefully Friday October 13, 2017 surrounded by her children at the age of 84. Ofelia was born on October 27, 1932. She is preceded in death by her husband of 64 years: Ruben Molina, her parents: Tomas and Paula Salinas, her sisters: Lydia, Sara and Mercedes, her brothers: Mario, Ambrioso and her son: Enrique Molina. Ofelia was a hard-working and determined woman. As a young woman, she taught herself to speak, read and write English. She was a strong advocate of education for her children and all that she encountered. She was extremely proud to have become an American citizen. She was a true entrepreneur and business-woman. She was the force behind “El Taquito”, “El Molino” and then later instrumental in establishing “Molina’s Mexican Restaurant.” In her younger days, she loved to travel the country and began collecting plates of all the places she or her children had visited. During retirement, she enjoyed spending time at home conversing with her children. She found joy in the company of her grandchildren and especially her great grandchildren. She was an extremely loving and fiercely protective mother, an amazing grandmother, a jovial great-grandmother with an extensive collection of knick-knacks that all the children enjoyed. She was full of life and love. She truly was the epitome of sacrificial love. She is survived by her children: Eddie (Yoli) Molina, Betty (RC) Perez, Eunice (Ray) Sanchez, Efrain (Anna) Molina, Eloyda (Javier) Garcia, Ester Molina, and Esmer (Vince) Garza. She is also survived by her brother: Tomas Salinas; and many grandchildren and great grandchildren. Visitation will be on Sunday, October 15, 2017 at Kreidler Funeral Home from 12pm – 6pm followed by a memorial service at 6pm. Funeral service will be at Kreidler Funeral Home on Monday, October 16, 2017 at 12pm with burial to follow at Valley Memorial Gardens at 1pm.

Ofelia Molina, of McAllen TX, passed away peacefully Friday October 13, 2017 surrounded by her children at the age of 84. Ofelia was born on October 27, 1932. She is preceded in death by her husband of 64 years: Ruben Molina, her parents: Tomas... View Obituary & Service Information

The family of Ofelia Molina created this Life Tributes page to make it easy to share your memories.