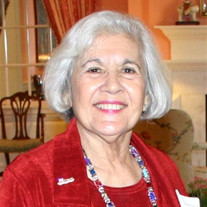 Norma Lee Albert June 21, 1924 to Sept. 2, 2016 Survived by her children, Marsha Marcus Wolff (Harvey), Ron Albert, and Sharon Albert Brier (Michael); 3 grandchildren, Michelle Marcus Laphensohn Ditzenberger (David) and Stacy Marcus Fuller (Bill) and Samson Brier (Linh); 7 great grandsons, (Austin Lapensohn, Dylan and Tanner Ditzenberger, Joshua and Mason Fuller and Dash and Max Brier); brother, David Westerman; and nephews and nieces. Norma Lee Westerman Albert was born to Adolph and Mary Levine Westerman on June 21, 1924, as their first child. Since her parents lived in Mercedes, TX, which did not have a hospital, Norma was born in San Antonio, TX. Six weeks later she became a permanent and valued citizen of the Rio Grande Valley. When she was two years old the family moved to McAllen where Adolph opened a man's shop. (He had a music store in Mercedes). In 1943, during World War II, she met the love of her life on a date in Austin. Although many fellows proposed to this brown eyed beauty, Louis captured her heart with his sense of humor. They married in Nashville, TN where his father lived. Although Norma thought she would become a nurse she had three children instead. She was active with their interests and learned to skype to keep up with the younger generation. In the 1960's she and Louis led promotional caravans of cars of McAllen's business people into Mexico to promote business in McAllen. There were signs on the McAllen cars that said Friendship Caravan-McAllen. Back then a little green jeep from Mexico accompanied the caravan in front and in back Norma was passionate about many things. She followed her mother's footsteps into Organizational work. Her blooming interest in African Violets and orchids led to a collection of 500 flowering plants in her windows. She helped with the books at Louis Albert's Men’s Wear and Mc Rey’s, the two stores they owned in 1970 to 1986. She was an active member of her community wherever she lived. What stood out about Norma to all that met her was her beautiful smile and beautiful hair. For fun she was in a mah jongg group that met weekly, a couple’s bridge group and she created theme parties!! Even in her 80's and 90’s she learned to play Mexican Train and other games in her new assisted living environment. In high school she was a founding member of a high school sorority called Tip Top and at UT she was Treasurer in her sorority Delta Phi Epsilon. Her accolades and honors were many: Outstanding Citizens Award by the Federation of Women's Clubs of the Rio Grande Valley, the City of McAllen's Outstanding Woman of the Year Award in 1962, Pres of the McAllen Federation of Women's Clubs, Pres of McAllen Chapter of Hadassah in 1990 and was the Regional Board V.P., Rec'd Hadassah Leadership Award by the National Chapter and for Outstanding Devotion and Commitment by the McAllen Chapter, Pres of the National Council of Jewish Women in McAllen, Pan American Round Table, an original founder of McAllen Hospital Auxiliary and a charter member for 53 years, after which she was honored with a Tenure Service Award for the years of 1953-2008, she rec'd the 2004 Shining Star of Hidalgo County Zonta Club, in 1973 Norma received an award as a valued chapter member of McAllen Methodist Hospital, she was a Past Pres of McAllen International Museum and awarded for countless hours of guild and board services in 1993, she was Past Pres of McAllen International Orchid Society and awarded for Service Above and Beyond in 1999-2005, Texas Jewish Historical Society V.P., Founding Member and Past President (and all offices) of the Sisterhood of Temple Emanuel, McAllen Child Study Club (Pres), Founding Member and Pres of Vesta Study Club. She was Historian and P.R. for all the organizations she was a member of, she also won a 1st Place State Award for her scrapbook for the McAllen Hospital Auxiliary, Rec’d Hadassah Leadership Award by the National Chapter for Outstanding Devotion by the McAllen Chapter, and was Pres of the National Council of Jewish Women in McAllen. At Town Village North in Dallas, where she moved in 2008, she started a Parkinson's Disease Support Group and was active as the Hospitality Chairman. She started Annual Teas on the Hospitality Committee and was on the Food & Menu Committee. In lieu of flowers memorial donations may be made to Temple Emanuel of McAllen, Rio Grande Hadassah or The Dallas Parkinson’s Assn.

The family of Norma Lee Albert created this Life Tributes page to make it easy to share your memories.