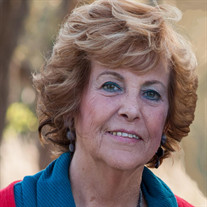 Nancy Sharon Miller Boultinghouse, 70, of McAllen passed away at Amara Hospice in Edinburg on Sunday, March 5, 2017 due to the lingering effects of lung cancer. Nancy graduated from Calallen High School in Corpus Christi, TX and received an Associates degree in Arts from Del Mar College. She married Danny Boultinghouse in 1968 and they moved to McAllen in 1972, where Nancy supported her husband’s architecture firm, took a turn working for a printing facility, and then a magazine publisher before spending the final 12 years of her career at the McAllen Economic Development Corporation (MEDC) as the Director of Marketing. Nancy was an avid outdoors-woman and spent many days soaking in the sun while reeling in the reds on the coast. Her love for life and compassion for others are evidenced by the outpouring of love and support from the Valley community during the final chapters of her life. Nancy is survived by her husband, Danny Boultinghouse; her daughter, Wanza Lefay Madrid; her granddaughter, Sierra Raine Berry; her step-granddaughter, Phoenix Arianne Berry; her brothers & sisters and their spouses, Kyle & Beverly Miller, Odessa & Johnny Dean, Otis & Beverly Miller, Yvonne & Henry Stewart, and Patricia Flagg. Nancy is also survived by her two devoted pups, Peanuts and Tassie, who, along with the rest of her family and friends, will miss her greatly. A Memorial service will be held on Friday, March 10, 2017 at 10:00 AM under the direction of First United Methodist Church in McAllen. A reception will immediately follow in the FUMC social room. In lieu of flowers, donations can be made to the Sanctuary Building Fund at First United Methodist Church. 4200 N. McColl Road McAllen, Texas 78504.

Nancy Sharon Miller Boultinghouse, 70, of McAllen passed away at Amara Hospice in Edinburg on Sunday, March 5, 2017 due to the lingering effects of lung cancer. Nancy graduated from Calallen High School in Corpus Christi, TX and received... View Obituary & Service Information

The family of Nancy Sharon Boultinghouse created this Life Tributes page to make it easy to share your memories.