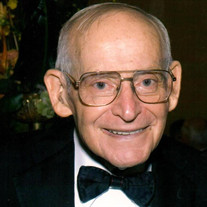 Morris Atlas passed away peacefully in his sleep after a lengthy illness on October 4, 2015, at his home in McAllen, Texas, surrounded by his loving family. In addition to his many professional accomplishments, Morris will be remembered by all... View Obituary & Service Information

The family of Morris Atlas created this Life Tributes page to make it easy to share your memories.

Morris Atlas passed away peacefully in his sleep after a lengthy...