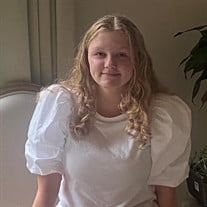 The sun became eclipsed on Tuesday, August 17, 2021, as the life of Moira Claire Arney, 15, was cut too short. She had a future so full of promise and was cherished by all whose lives she touched. Moira, affectionately known as Mo by her friends, was born to parents Patrick (Stillwater, MN) and Deborah Dennison Arney (Hart, MI). She attended McAllen High School where she was passionate about academics and had dreams of attending Notre Dame. She played the violin, was an active member of the swim team, was recently inducted into the theater troupe, and was a defender for the Lady Bulldogs soccer team. Moira loved animals, music (Beatles), creativity, and took any opportunity to learn. Active in her church as an altar server, she especially loved holding the book for the priest. A natural leader, Moira emanated grace and maturity. She is preceded in death by Richard M. Arney and Judith Arney, paternal grandparents, and Moira (Molly) Arney, paternal aunt. Moira’s memory will forever be treasured by her parents, brother Liam Arney, grandparents Carl and Claire Dennison of Hart, Michigan, and Barbara Arney of Green Valley, Arizona; as well as her many aunts, uncles and cousins. She is also greatly missed by her beloved dog, Stella. We will honor and celebrate Moira’s life with a visitation on Monday, August 23, 2021, at Holy Spirit Church, 2201 Martin Avenue, McAllen TX, 78504, from 3:00 p.m. to 7:00 p.m. followed by Rosary at 7:00pm. A mass will be held at 11:00 a.m. on Tuesday, August 24, 2021, at Holy Spirit Catholic Church. Reception luncheon to follow in the Parish Hall. Face masks are required. The service will be live streamed at: https://holyspiritmcallen.org/live. In lieu of flowers the Arney family is kindly requesting donations to a scholarship fund in Moira’s name to benefit the students of McAllen High School. Donations can be made at the following link. https://mealtrain.com/yemwre Funeral services are under the direction of Kreidler Funeral Home.

The sun became eclipsed on Tuesday, August 17, 2021, as the life of Moira Claire Arney, 15, was cut too short. She had a future so full of promise and was cherished by all whose lives she touched. Moira, affectionately known as Mo by her friends,... View Obituary & Service Information

The family of Moira Claire Arney created this Life Tributes page to make it easy to share your memories.