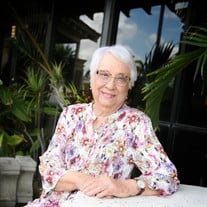 Minerva Lazo Barrera, 86, was welcomed into Heaven after she passed away Tuesday, March 17 at home surrounded by her family. She was born on February 4, 1934 in Mission to Alfredo Lazo and Minnie Crum Lazo. She grew up in Starr County and later attended Mission and McAllen schools. Minnie was voted Best All Around and played on the first girls' basketball team at McHi. She married her Navy sailor, Fred Barrera, home from the Korean War, and graduated from Pan American College in Edinburg. Minnie taught physical education at Sam Houston Elementary School in McAllen and raised three children. She loved playing softball, camping in the mountains, going to the beach, reading novels, watching Broadway shows, cheering for the S.A. Spurs, and attending all her grandchildren's activities. After retiring, Minnie and Fred traveled to Mexico, Alaska, Canada, New England, Honduras and Belize. She participated in the Walk to Emmaus and was a member of First United Methodist Church of McAllen. Minnie was predeceased by her sisters, Thelma Reid, Velia Hinojosa, and half-brothers, Sonny Lazo and Arturo Lazo Jr. She is survived by her husband, Alfredo R. Barrera of McAllen; daughter, Dina (Ken) Wilson of Edinburg; son, Arthur (Joan) Barrera of McAllen; daughter Sandy (Tony) Burris of San Antonio; grandchildren, Alyssa Fowler, Jennifer Martelli, Jacklyn Newton, Amanda Pagan, Derek Burris, Matt Wilson, Courtney Villarreal; great grandchildren, Ayla Davila, Gabrielle Featherson, Kailey Wilson, Hayden Wilson, Merrik Wilson, Ethan Fowler, Levin Pagan and Emma Martelli. A private family graveside service will be held at the Rio Grande Veterans Cemetery. A Celebration of Life will be announced at a later date. Minnie was blessed to have her family from all over Texas and new great grandbaby come to her side before she left this Earth. We appreciate the compassionate care by Doctors Hospital at Renaissance ER, Cardiac and Hospice staff. In lieu of flowers, Minnie would hope you do a random act of kindness in her memory. Contributions can also be made to your church in her honor.

Minerva Lazo Barrera, 86, was welcomed into Heaven after she passed away Tuesday, March 17 at home surrounded by her family. She was born on February 4, 1934 in Mission to Alfredo Lazo and Minnie Crum Lazo. She grew up in Starr County and later... View Obituary & Service Information

The family of Minerva Lazo Barrera created this Life Tributes page to make it easy to share your memories.

Minerva Lazo Barrera, 86, was welcomed into Heaven after she...