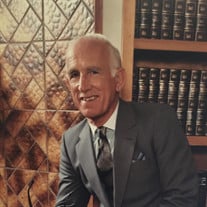 Michael John Alleyn (Mickey) died at home surrounded by his loving family on October 22, 2019. He was 94 years old. Mickey was born in Brownsville, Texas on October 19, 1925. While attending the University of Texas, he met his wife of 72 years, Beverly Nelson Alleyn who was attending Nursing School. He proudly served as an officer in the United States Navy on the USS Denver during World War II. He continued to serve in the Navy Reserves for almost 20 years as Unit Commander. After the War he was working for the Rio Grande Valley Gas Company and was approached by an entrepreneur, Calvin Bentsen, to start an air conditioning business. Joined by WWII vet Bob Helbing and later, Vietnam War vet Jim Webb, Texair Air Conditioning and Contracting became a 70 + year business. He also went into partnership with another entrepreneur, Jim Shawn with Mobile Crane. Mickey served as a Scout Master for many years and was instrumental in enabling many scouts to achieve the rank of Eagle. One of his favorite outside activities was being part of the Valley Poet Society. His poems were loved and admired by all. He also entertained his family and friends with his drawings. Michael is preceded in death by his wife of 72 years, Beverly Alleyn. Survivors include 4 children: Marian Kaye Strickland, Michael John Alleyn, Pauline McClendon (Bill), and Dr. Robert Alleyn (Melody),1 Godchild, Tommy Winkler and 7 grandchildren: Blake Alleyn (Christine), Brent Alleyn (Valerie), Jeremy McClendon (Amanda), Katy Raha (Mark), Stephanie Elmore (John), Alyssa Panozzo (Mike), and Jimmy Alleyn (Morgan), as well as 9 great grandchildren. The Alleyn family would like to thank all the angels from United Care Health Services who served him faithfully, DHR Hospital and Rehab staff, Kindred Hospice all of whom provided above and beyond care and service. Visitation and Rosary will be from 6 to 8 Thursday, at Kreidler Funeral Home. Funeral Mass will be held at Our Lady of Sorrows Church in McAllen at 10:00 am Friday.Burial will follow at Valley Memorial Gardens Cemetery. The family suggests that donations may be made to the Gladys Porter Zoo or Boy Scout Troop 68. Mickey will always be remembered for his tremendous humor, and what is fondly referred to as “Mickeyisms”. See ya when we see ya, Mickey.

Michael John Alleyn (Mickey) died at home surrounded by his loving family on October 22, 2019. He was 94 years old. Mickey was born in Brownsville, Texas on October 19, 1925. While attending the University of Texas, he met his wife of 72... View Obituary & Service Information

The family of Michael "Mickey" John Alleyn created this Life Tributes page to make it easy to share your memories.