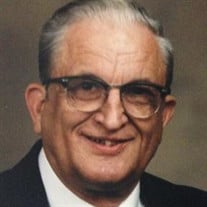 Merlyn David Egle celebrated his welcome into the kingdom of Heaven on December 8, 2015 in Edinburg, Texas at age 92. A long time resident of McAllen, he had been thoughtfully cared for by the staff at Arborview Nursing Home for the past two years. His devoted wife of 64 years, Marilyn Nancy Egle, was by his side daily to ensure his comfort. Merlyn Egle is survived by his loving wife Marilyn Egle and all six of his children including David, Don, Tim, Laurence, Dan, and his only daughter Becky Woodard; five grandchildren he adored including Elizabeth, Sarabeth, Melissa, Courtney, and Jennifer; two great-grandchildren Isaac and Hannah; as well as other nephews, nieces, and cousins. He was preceded in death by his parents George and Clara Egle and his brother Harold Egle. Merlyn was born July 2, 1923 in Waldo Township, Illinois. He was valedictorian of Flanagan High School and graduated cum laude from Taylor University of Upland, Indiana where he met his wife. He received his Master of Divinity degree from Northern Baptist Theological Seminary of Chicago, Illinois and his Master of Education degree from Pan American University of Edinburg, Texas. He married his college sweetheart February 16, 1951, at Bethel Covenant Church in her hometown of Wallace Michigan. They moved to Bluffton, Ohio where he served as pastor of the Mennonite Church. While Merlyn retired from the McAllen school district after teaching for 23 years, he actually had a series of jobs over his life including being a farm hand, minister, factory worker, salesman, social worker, Christian radio announcer and others. He was most passionate about the evangelical music that he and his wife performed for Spanish speaking churches in south Texas and Mexico and, in later years, at local trailer parks and nursing homes. Visitation, Funeral service, and Fellowship will be at Kreidler Memorial Chapel on the corner of Taylor Rd. and Nolana. on Saturday December 12. Visitation will begin at 1pm. A funeral service, officiated by his nephew, John Spyker will begin at 2pm. After graveside services at nearby Valley Memorial Gardens, family and friends will return to the chapel for fellowship. Charitable donations may be given to Gideon's International at Gideons.org in honor of Merlyn Egle's long service as a chaplain within the organization.

Merlyn David Egle celebrated his welcome into the kingdom of Heaven on December 8, 2015 in Edinburg, Texas at age 92. A long time resident of McAllen, he had been thoughtfully cared for by the staff at Arborview Nursing Home for the past two... View Obituary & Service Information

The family of Merlyn David Egle created this Life Tributes page to make it easy to share your memories.

Merlyn David Egle celebrated his welcome into the kingdom of...