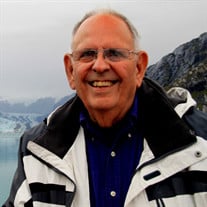 Reverend Max G. Grubb, peacefully and quietly, returned home to visit his Lord, October 5, 2017, at the Amara Hospice in Edinburg, Texas, after a long fight with pulmonary fibrosis. Max was born in Topeka, Kansas, on April 18, 1933, and attended Topeka public schools. After having served two years in the U.S. Army during the Korean Conflict, he graduated as a MacVicar Scholar from Washburn University in Topeka. He then attended the University of Kansas to obtain a master’s degree in Public Administration while, at the same time, teaching courses in Western Civilization at the University. Max went back to college to Brite Divinity School to attend seminary to obtain his Master of Divinity at his precious Texas Christian University when he was 65 years old and was ordained at the age of 68. Having served at Olney, Texas, during seminary, he moved to the Valley to serve Disciple churches in Donna and McAllen for five years before becoming full-time pastor at McAllen. His span of service as of July 1, 2017, became the longest of any minister servicing First Christian (Disciples of Christ) McAllen, since its beginning in 1914. Prior to becoming the pastor in McAllen, Max had taught at the University of Kansas in the Political Science department, served as Assistant State Highway Director for the State of Kansas, owned a swimming pool construction and service company, and served a 30 year career as salesman, regional manager and corporate marketing director for a nation-wide pool and spa equipment manufacturer and distributor. He also had a career as a Chamber of Commerce Executive serving chambers in the Dallas Metroplex, Crockett and Granbury in Texas. In the Valley, Max served as Chairman of the Board of Directors for Habitat for Humanity for three years and on the Board of Directors for Hope Family Healthy Clinic for six years with three years as Chairman. He had been President of the Greater McAllen Ministerial Alliance, President of the Lower Rio Grande Valley District of the Disciples of Christ, and served as Representative to the Regional Council of the Disciples of Christ in the Southwest. He was honored to have had a 50 year membership as a Rotarian and was a member of the McAllen North Rotary Club. Of all his organizations, Max was most thankful for over 35 years of sobriety as an active participant in Alcoholics Anonymous. He used to say, “I serve a Second Chance God.” Later he changed to say, “I serve a God of Many Chances!” Max is survived by his wife of thirty three years, Roda. She was not only a wonderful wife who made his life what he had hoped it would be, but a full time partner in everything he did. She is authoring the biography about his life, aptly named, The Naked Pastor. Preceded in death by his twins and son, Joe, Max leaves behind his sons, John (Cathie, grandson Eric), and Jerry (Doreen), and daughter, Connie Sue Tigno, 11 grandchildren and 10 great grandchildren. In lieu of flowers, Max requested donations be made to the First Christian Church (Disciples of Christ) McAllen or your favorite charity. Memorial services will be held November 10th at the church at 10:00 a.m. and the RGV State Veterans Cemetery at 1:00 p.m.

Reverend Max G. Grubb, peacefully and quietly, returned home to visit his Lord, October 5, 2017, at the Amara Hospice in Edinburg, Texas, after a long fight with pulmonary fibrosis. Max was born in Topeka, Kansas, on April 18, 1933, and attended... View Obituary & Service Information

The family of Rev. Max G. Grubb created this Life Tributes page to make it easy to share your memories.