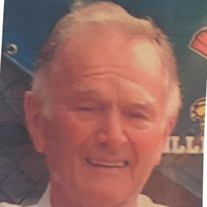 Max Edwin Burkhart, Jr. passed away on October 15, 2021 in McAllen, Texas. He was born January 19, 1924, the son of Fay and Max Edwin Burkhart and has been a resident of the Rio Grande Valley since 1925. He graduated from Pharr-San Juan-Alamo High School in 1941, received a Bachelor of Science of Architecture Degree from Texas A&M in 1949 and lacked one course in completing his Masters of Architecture at the University of Southern California. He was member of the American Institute of Architecture for over 50 years. In his early years practicing Architecture, he formed a storied relationship with former Director of the School of Architecture at Rice University, Allen Taniguchi, and one of the most well known Texas architects, O’Neal Ford. Burkhart, Taniguchi and Ford, Architects became a real presence in Texas. Max served in the Army during World War II. Max brought many innovations to the construction industry in South Texas and was well respected by all who knew or worked with him. Max was an innovator in both design and construction. Precast Tilt-Wall concrete construction was his signature contribution, and he brought the distinctive expertise to the Rio Grande Valley. Max and his team participated in the design and construction of historic projects across the valley including Bridgepoint, Boardwalk, Padre Grande, Cimarron Country Club, the former El Centro Mall and scores of manufacturing facilities. Max was also an experimenter bringing solar panels to his own home in the 1960’s. He and his wife and best friend, Bernice, loved traveling to all kinds of places, scuba diving, hunting birds with their friends and meeting up with their special group on Thursday evenings for dinner. He is proceeded in death by his wife of 57 years, Bernice Baden Burkhart. He is survived by daughter Barbara O’Riley and husband Rick, and son Brad Burkhart and wife Margaret, and five grandchildren: Chelsea O’Riley, Katie O’Riley (Brian), Shea Burkhart, Shawn Burkhart and Brian Burkhart. In lieu of flowers, please make contributions to Trinity Episcopal Church, 210 W Caffery Ave, Pharr, TX, 78577. Graveside services will be Friday, October 22, 2021 at 10:30am at Roselawn Cemetery, McAllen, Texas.

Max Edwin Burkhart, Jr. passed away on October 15, 2021 in McAllen, Texas. He was born January 19, 1924, the son of Fay and Max Edwin Burkhart and has been a resident of the Rio Grande Valley since 1925. He graduated from Pharr-San Juan-Alamo... View Obituary & Service Information

The family of Max Edwin Burkhart Jr. created this Life Tributes page to make it easy to share your memories.