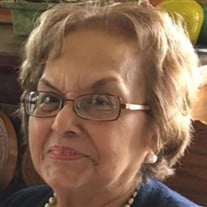 Mary Obregon Sanchez was born to Alfonso and Bernarda Obregon on September 12, 1935 in Edinburg, Tx. She passed away on March 31, 2020, at Houston Methodist Hospital after a lingering illness. Mary was the third of eleven children. As a child, Mary attended Sacred Heart Catholic School and graduated from Edinburg High School in 1954. She attended Pan American College and studied accounting for two years. In 1957, she met and married the love of her life, Fernando “Gus” Sanchez in Edinburg at Sacred Heart Catholic Church. They lived most of their lives together in McAllen. Mary retired as a bookkeeper from Valero Corporation/RGV Gas in 1992 and spent the rest of her life living with her daughters helping to raise her grandchildren. She loved attending church, traveling, shopping and caring for her grandchildren. She was very active until a recent illness in the last months of her life. Her parents, two sisters, Andrea Obregon RSM, Francisca Garcia, and husband, Fernando “Gus” Sanchez, preceded her in death. Mary is survived by six children and their spouses: Fernando G. Jr. and Juli Sanchez of El Paso, Laura and Hilton Queton of Round Rock, Alma and Owen Campbell of Houston, Jerry Sanchez of Edinburg, Javier Sanchez of Houston, George and Nina Sanchez of San Antonio; four grandchildren, Lance and Melvin Queton, Alexa Campbell, Maximus Sanchez and one great granddaughter Iris vonRosenberg Queton. Her siblings also survive her: Olivia M. Obregon RSM, Dominga Obregon, Gilbert and Nancy Obregon, Martha and Mickey French, Eligio and Irene Obregon, Robert and Ofelia Obregon, Ana M. Perez, Zita and Ronald Colvin, and numerous nieces and nephews. Due to the pandemic, a private burial service will be held for immediate family only. A future memorial mass and celebration of her life will be held at a later date.

Mary Obregon Sanchez was born to Alfonso and Bernarda Obregon on September 12, 1935 in Edinburg, Tx. She passed away on March 31, 2020, at Houston Methodist Hospital after a lingering illness. Mary was the third of eleven children. As a child,... View Obituary & Service Information

The family of Mary O. Sanchez created this Life Tributes page to make it easy to share your memories.

Mary Obregon Sanchez was born to Alfonso and Bernarda Obregon...