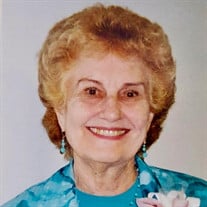 Louise Prater, long-time former resident of McAllen, passed away on Tuesday, May 15, at Autumn Leaves On White Rock Retirement Home in Dallas, at the age of 99. Born Mary Louise Alexander on August 18, 1918, in Teague, Texas, she was the first daughter of Louis Emile Alexander and Goldie Undine Hardy. She grew up in Teague and along the Missouri Pacific Railway between Houston and Dallas, as her father was foreman of the MP crew that kept the rail line in repair. Following her father’s death from cancer in 1929, Louise went to live and attend school at Masonic Home in Ft. Worth. She graduated from Masonic Home in 1935 and briefly attended business school. In 1936, she met and married Woodrow Wilson Prater of Dawson, Texas. They moved to the Rio Grande Valley in 1937 and lived in San Benito and La Feria while Wilson worked as a Caterpillar operator for the IBWC, building levees along the Rio Grande. With the beginning of WW2, she moved around the US with Wilson during his service in the Navy’s Seabees. She became a secretary at Ellington AFB, Houston, while Wilson served overseas in the Pacific. Following the war, they lived in Monte Alto and out in the country northwest of Mission as Wilson pursued his dream of farming. Eventually, in 1950, they built a home in McAllen, with Wilson farming near Los Ebaños, and they started a family. In the late 1950s, Louise began working part-time for McAllen ISD’s Business Office. By the beginning of the 1960s, she was full-time secretary and district purchasing agent for the MISD business office, working for many years with Asst. Superintendent Woody Gearhart. She retired from education in the 1980s, following Wilson’s death, and devoted her time to many clubs in the area. She was a member and an officer of the McAllen Medical Center’s Hospital Volunteers, Pan American Round Table, Sorosis Professional Women’s Club, and Order of the Eastern Star. As well, while working for MISD, she was an active member of Texas Educational Secretaries Association. Both she and Wilson were members of First Presbyterian Church, McAllen, too. In 2007, Louise moved to Dallas to live in a retirement home setting and became an active and much-loved member of Grace United Methodist Church. She was preceded in death by her parents, her husband, and all of her brothers (Louis, Jack, Hardy, and Mike Alexander) and her sister Jimmie Ruth Alexander Angel. She is survived by her children, Larry Prater of McAllen and Miranda Prater of Dallas, and their spouses; her grandchildren, Justin Prater of Austin and Janna Diaz of McAllen, and their spouses; and six great-grandchildren. In lieu of flowers, the family requests that donations be sent to Grace United Methodist Church, Capital Campaign, 4105 Junius St., Dallas, TX 75246. Visitation will be held from 6-8 pm Monday, May 21, 2018. A graveside service will be held at 10 a.m. Tuesday, May 22, 2018 at Valley Memorial Gardens Cemetery.

Louise Prater, long-time former resident of McAllen, passed away on Tuesday, May 15, at Autumn Leaves On White Rock Retirement Home in Dallas, at the age of 99. Born Mary Louise Alexander on August 18, 1918, in Teague, Texas, she was the first... View Obituary & Service Information

The family of Mary Louise Prater created this Life Tributes page to make it easy to share your memories.