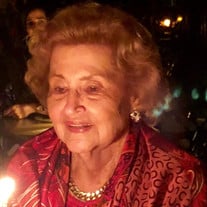 Mary Nell Baldridge (née Davis) was born on August 16th, 1928 in San Antonio, Texas to Nellie Ruth (née Harris) Davis and Aulbin Pearson Davis. She and her sister, Ida Ruth “Toodly”, were raised in Corpus Christi, Texas. Always the beauty, Mary Nell was chosen in her youth to be a Duchess of the Buccaneer Days Festival, held in Corpus Christi. She particularly enjoyed riding on the float and waving to the crowd in the festival's parade. At the age of 10, Mary Nell came to the Rio Grande Valley on a family trip and enjoyed it so much that she proclaimed to her mother and father that some day she would live in the Valley. Her dream came true! She completed her Bachelor’s Degree in Education at A&I Kingsville (now Texas A&M University–Kingsville). While working on her Master’s, she accepted her first teaching position in La Joya ISD. During this time, she met and later married the love of her life, James Henry “Jim” Baldridge. While dating, Mary Nell was given the nickname “Pistol” because she could always be found by her sweet Jim’s side. Jim came from a farming and ranching family with businesses located both in the Rio Grande Valley and in Mexico. The couple moved to Mexico for the family business and raised their daughters, Sawnie and Cedar, both on their ranch, Rancho Peñitas, and in the city of Tampico, Tamaulipas. Always the teacher, Mary Nell's passion for education extended throughout her life. At the ranches in Mexico, she taught the cowboys' children to read and write. Mary Nell loved her friends and her life in McAllen. She had many interests: traveling, reading, tennis, golf, and bridge. She loved to attend concerts at the Valley Symphony Orchestra. She was a lifelong animal lover. When at the ranch in Mexcio, she could be found bottle feeding calves or raising litters of cattle dog pups. Two significant presences in her later life were her grand-dog, Pancho Villa, and her grand-cat, Biggie. Mary Nell avidly followed Pancho Villa’s successful show dog career and proudly attended the Westminster Kennel Club Dog Show in New York City. But her greatest delight was taking her family to South Padre Island every summer—a tradition she began with her children and lovingly continued with her grandchildren. She also enthusiastically volunteered for the Shary Mansion as a docent and for McAllen ISD as a reading and writing mentor for the School District’s Host Program. Mary Nell was a proud member of the following: The United States Tennis Association, the McAllen Country Club Ladies’ Tennis and Golf Associations, the Junior Service League of Mission, PEO Chapter BV, the 20th Century Book Club, the Pan American Round Table, the New Birders Club, the Museum of South Texas History, and the First United Methodist Church of McAllen. Mary Nell passed away peacefully, surrounded by her family, on January 17th in Dallas, Texas. Her joy for life was contagious. She left a lasting legacy of kindness, generosity, and gentleness to both her family and community. Mary Nell is survived by: Daughter Cedar Anne Baldridge of Houston, Texas; Daughter Sawnie Ruth Baldridge Smith; Son-in-Law Julius Grey Smith; Grandson Travis James Smith; Granddaughter Sawnie Bertran Smith, all of Dallas, Texas; Niece Penelope Susan Crump of Atlanta, Georgia; Nephew Jack Sanders “Sandy” Crump Jr. of Gulfport, Florida; Niece Debra Dunn Crump of Panama City Beach, Florida; and numerous nieces and nephews. She is preceded in death by her husband, James Henry Baldridge; sister, Ida Ruth Crump; and her grandson, Henry Manela Baldridge. A Memorial Service will be held on Saturday, January 25th at 2pm at the First United Methodist Church of McAllen, located at 4200 North McColl Road, McAllen, Texas 78504. Should one wish to make a contribution in honor of Mary Nell, these can be made to: First United Methodist Church of McAllen 4200 North McColl Road McAllen, Texas 78504 Museum of South Texas History 200 North Closner Boulevard Edinburg, Texas 78541

The family of Mary Nell Baldridge created this Life Tributes page to make it easy to share your memories.