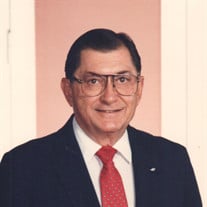 Another member of “The Greatest Generation” has passed on. Marvin Henry Kautsch, 95, died peacefully at home on December 26, 2018. Marvin was born December 16, 1923 in Lohman, MO, the only child to Arthur and Ola Kautsch. When he was only three yrs. old, the family left their German community and took an excursion train to South Texas where they bought farm land and settled in Swallow, now Alamo, TX. Marvin’s father bought an existing lumber company, which eventually became Kautsch Lumber. As a child growing up in south Alamo, Marvin recalled stories of the Great Hurricane of 1933, riding horseback into town, swimming in canals for entertainment, camping out next to the river in what is now Santa Ana Wildlife Refuge, and taking a ferry boat across the Laguna Madre to South Padre Island where only the jetties existed in those days. At PSJA High School, Marvin was active in the Bears’ band and football program. After school, he worked alongside his parents in the family business, making deliveries, etc. In 1941, he attended Texas A&M College in Bryan, later transferring to Texas A&I in Kingsville where he joined the Army Air Corps Reserves. Later, he was transferred to Stillwater, OK, as an aviation cadet. He was soon joined by his high school “PSJA Belle”, Dorothy Faye Moseley, who took the bus from college in Denton to marry her “PSJA Beau.” Their union would last for 68 years. In 1943, Marvin was called to active duty at the San Antonio Cadet Center, then to Ballenger, San Angelo, and Lubbock Air Force Base where he trained with the 4th Air Force in B-24 Bombers, graduating as a 2nd Lt. As a member of the Air Force Reserves for many years, he held the rank of Captain. At the end of WWII, he and Dorothy returned to Alamo to raise a family and join the lumber business. Marvin worked with his dad and later his son, Johnny, for forty-five years. Building one of the Valley’s most successful businesses, he exemplified that same philosophy in his personal life, which represented honesty and integrity. Proudly, Kautsch True Value & Lumber still thrives under the leadership of the third Kautsch generation and is honored to carry the designation of Texas State Historical Business. Both Marvin and Dorothy were active in service to their community and in particular to the Alamo Community Church. Serving as Worshipful Master of the Masons and a member of both the Scottish Rite and Shiners, he attended meetings faithfully for fifty years. He proudly served as President and board member for PSJA school district, Alamo Lion’s Club, Alamo Bank of Texas (now Frost), Valley Lumbermen’s Association, and the Valley Chamber of Commerce. Marvin was named “Alamo Man of the Year” during the City’s seventy-fifth birthday celebration and served alongside Dorothy as Parade Marshalls for the big event. Marvin is preceded in death by his beloved wife Dorothy Faye Moseley Kautsch. He leaves to honor his memory a daughter, Karla (David) Hutcherson of Gainesville, John (Yvonne) Kautsch of Alamo, Grandsons: Greg Hutcherson and Daren (Kari) Hutcherson of Gainesville, Craig (Jennifer) Kautsch and Curt Kautsch of Ft. Worth, and Mark May of McAllen. Great-grandchildren: Katie Jo Kautsch of Austin, Fisher Kautsch of Ft. Worth, Rachel Hutcherson and Luke Hutcherson, both of Gainesville. The number of nieces and nephews, thanks to the Moseley Clan is too huge to mention, but Uncle Marvin enjoyed each and every one of them. Also part of our family is Elvia Salinas, Marvin’s angel and caregiver for many years. Words cannot describe her love and dedication not only to Marvin, but to all of us. Michael (Frotze) Kormeier of San Juan and Carol (Kormeier) Nanni of Alamo, who were close to Marvin and Dorothy all of their lives. Blessed to be with us during this time is Georgina Godwin, who arrived from England in time to wish Marvin his last “happy birthday.” Georgina was Marvin and Dorothy’s foreign exchange student-daughter who lived with the family while attending PSJA High School in the early sixties. Visitation with the family will be at Kreidler’s Funeral Home Friday, Dec. 28 from 6:00-8:00 PM. A private graveside burial will take place on Saturday. In lieu of flowers, memorials may be made in Marvin’s memory to the RGV Food Bank or to the charity of your choice.

The family of Marvin Henry Kautsch created this Life Tributes page to make it easy to share your memories.

Another member of “The Greatest Generation” has passed on. Marvin...