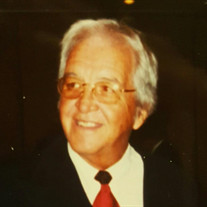 Marvin L. Boland Jr. of McAllen, TX passed away on March 23, 2017 at the age of 84. He was born on August 29, 1932, in Atlanta, TX, to Marvin L. Boland Sr. and Bonnie Hawthorne Boland. He lived in a number of small towns in East Texas and western Louisiana, where his father was a Baptist preacher, eventually graduating high school in Tenaha, TX. He entered Texas A & M in 1949 at the age of 17. His first stint at A & M came to an end on the heels of a college prank involving the short disappearance of one of the Baylor bear mascots. An actual bear. While sorting out his life after this escapade, he decided to enter the Army. But prior to doing so, he ran into Marian Walston, who was working at a drugstore in Palestine, TX. They married in 1953, only shortly before he was transferred to Germany for 2 years. They always said that they never had a disagreement for the first two years they were married. Upon discharge from the Army, they lived and worked in Tyler for a while, but he had bigger plans. He returned to Texas A & M and graduated with an architecture degree in 1961. He began his career with Bowman Swanson Hiester in Harlingen in 1961, and moved to Brownsville in 1962 when the firm opened an office there. He eventually became a partner in the firm Swanson Hiester Wilson Boland. In 1972, he left SHWB to start a private practice, and continued to practice in Brownsville until 1995, when he joined UT – Pan American as Director of Facilities Planning and Construction, where he worked until his retirement in 2010. Some 15 buildings were built on the campus under his oversight during this period. He had many professional accomplishments, designing or being involved in the design of a number of notable buildings throughout the Valley. But no accomplishment will endure like the work his firm, Landscape International, did in bringing the Town of Rancho Viejo and the Rancho Viejo Golf Resort into being. From 5,000 acres of orchard and farmland, his firm prepared and executed the master plan for the town, the resort and both El Diablo and El Angel golf courses. This 5,000 acres stretched from the Expressway to the Rio Grande River, with River Bend Golf Club being the last planned course and resort that his firm designed in that development. Marvin also designed the Diablo logo that was used by the club for decades. Marvin was active in his community. He was a past president of the RGV AIA, coached in and was president of the West Brownsville Little League, was very involved in Charro Days in the 60’s and 70’s, and was active in the Confederate Air Force when it was headquartered in the Valley. He was an active golfer at VICC and Rancho Viejo, and he and Marian enjoyed traveling and playing golf together. He and his partner won the Los Compadres Member-Guest in 1975. He earned his private pilot’s license, and enjoyed flying with all of his friends, especially Jimmy John and Bob Austin. The three of them built a kit plane together, a planned 2 year job that turned into a 13 year project. They all managed to survive both its construction and its sporty flying characteristics. Marvin was a great son, husband, father and grandfather. He is survived by his loving wife of 63 years, Marian, who fulfilled their wedding vows by being by his side until they were parted by death. He is also survived by sons Mickey (Norma) Boland of Harlingen, TX, Mark Boland of Louisville, KY, and daughter Marla (Jim) Roe of Frisco, TX, as well as grandchildren Nick, Ashley and Brandon Boland, Mark Jr. and Becca Boland, and Meagan and Madeline Wills. Funeral arrangements are under the care of Kreidler Funeral Home, 314 N. 10th St., McAllen, TX. Visitation will be from 4 – 7 p.m. on Sunday, March 26. Funeral service at 11:00 a.m. on Monday, March 27. Private burial to follow.

Marvin L. Boland Jr. of McAllen, TX passed away on March 23, 2017 at the age of 84. He was born on August 29, 1932, in Atlanta, TX, to Marvin L. Boland Sr. and Bonnie Hawthorne Boland. He lived in a number of small towns in East Texas and... View Obituary & Service Information

The family of Marvin L. Boland created this Life Tributes page to make it easy to share your memories.