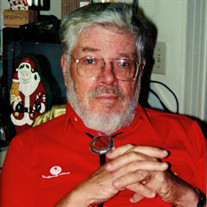 Marvin S. Baker, Jr.---96 years, 8 months, and 11 days old, left all of his infirmities of body behind and took his zest for life to his new home in Heaven on May 19th, 2017. In the resume of his life, he entered this world as the oldest of five children born to Eunice and Marvin Baker, Sr. (He, Corinne, Firmin, Marjorie and Helen, his baby sister). He attended school in Hugoton, Kansas, lived through the Dust Bowl, the Depression, and the CCC (Civilian Conservation Corps, Camp 27 46, Alcester, S. Dakota 1938-1940) as the survey crew medic. He hoped to start university, but then he got caught up in something called World War II and meeting the girl of his dreams, Catherine, a tenant in one of his father's apartments. He loved riding his Indian Motorcycle through Wichita, and despite the evenings of roaring to the local dance hall with her skirt blowing up in her face, she finally agreed to marry him in April of 1943, when he was on leave from the army and before he was shipped to the South Pacific. The following May, Marvin Baker Ill was born, and he saw his boy for the first time when he was two years old. During his service from 1942 to 1945, he was a corporal, working as a surgical technician in New Guinea and the Philippines. He decided, like his mother and his Grandmother Firmin, he wanted to become a teacher. In 1948, he received a degree in education from Wichita State University, his daughter Kathleen was born, and he went to work teaching at Gove Rural High School (KS) until 1950. He would have stayed longer because he really loved his students and the work, but then the Korean Conflict broke out. In December 1950, he reenlisted to serve his country as a Captain in the Adjutant General Corps, as a Special Services Officer. And in 1952 his youngest daughter Patricia was born at Ft. Meade Army Hospital, MD. After a two-year residence in St. John's, Newfoundland and a side trip to Greenland, he was transferred to Ft. Sam Houston in 1954, where he remained until he was honorably discharged in 1957. He moved his family to Marion, Texas and went to work as a teacher and administrator at Schertz-Cibolo schools from 1957-1961. After attaining a master's degree from Incarnate Word in reading, he worked as 4th grade reading specialist at Canyon Elementary School in New Braunfels until 1962, when he decided to move to South Texas to take a teaching position at McHi. There he remained as a biology, biochemistry, and ecology teacher until 1987, when he retired. During summer National Science Foundation studies around the US, he enhanced his knowledge of many scientific principles and earned further certificates and degrees. He was always proudest of his discovery of two new species of Demodex (armadillo and jack rabbit hosts) during the summers of 1967 and 1968 in a research project at the University of Massachusetts, under the mentorship of Dr. William Nutting. This parasitology research went on to become instrumental in finding causes for certain types of skin disorders, including a form of skin cancer. In 1989, he founded and participated in the Rio Grande Old Farm Equipment Club for 12 years, joining in numerous S. TX parades and antique farm equipment shows with his 1928 International 1 ton 6 speed truck. He researched and wrote articles about antique farm equipment and put out the club's periodical. He loved to collect rocks, vintage autos, old phonographs, 78 rpm records, stamps, magazines, books, new friends, the practice of kissing ladies' hands and doling out "magic rocks". He enjoyed bowling, gardening, auctions, garage sales, fishing, caring for his pets of all kinds, and nurturing his wife and children with his excellent stews made in the pressure cooker, pancakes on Sunday morning, and lots of encouragement and problem-solving. He was an avid reader to the very end; and well into his 80s, he fell in love with his computer when he learned how to email and Facebook. He was a member of Our Lady of Sorrows Catholic Church, the American Legion Post #37, and the Veterans of Foreign Wars #8788, NEA, TSTA, TCTA, but most of all he was just a valuable member of the human race, someone who saw something good and special in everyone he met. His son "Shorty" passed away in 2002, as did the great love of his life for 67 years, Catherine, in 2010. He is preceded in death by most of his oldest friends and family but his three sisters, a host of nieces and nephews, his 2 daughters Kathleen and Patricia, 6 grand-children Christine, Annette, Charles, Richard, Robert, and Jennifer, 14 great-grandchildren, and 1 great-great-granddaughter, Avery. He was a profoundly gentle, kind, intelligent, patriotic, generous, caring and lovable man. We will miss playing cribbage and being beaten by him, but we certainly enjoyed our time with him. In Tuesdays with Morrie, Morrie tells Mitch, "Death takes a life, not a relationship." The person lives on in our memories and the memories of others. And that will certainly be true of Marvin S. Baker as he fully embraces the heavenly adventures to come. After all, he loved to explore, to learn new things, to travel and to pass along that knowledge to anyone who wanted to learn it. He possessed what the naturalist Rachel Carson called "a sense of wonder." A celebration of his life will be held from 6 to 8 pm at Kreidler Funeral Home on Tuesday, May 30, 2017, where it is hoped that friends will come to share the best of their memories of this wonderful man. As expressions of sympathy, he would appreciate donations in his name to be made to Yaqui Animal Rescue, 1803 N Bryan Road, Mission, TX 78572. It is a no-kill animal ranch that cares for all kinds of animals, helping them to find new homes and happy lives. http://www.YaquiAnimalRescue.comor visit their Facebook page to see the good work that they are doing.

Marvin S. Baker, Jr.---96 years, 8 months, and 11 days old, left all of his infirmities of body behind and took his zest for life to his new home in Heaven on May 19th, 2017. In the resume of his life, he entered this world as the oldest of... View Obituary & Service Information

The family of Marvin S. Baker Jr. created this Life Tributes page to make it easy to share your memories.