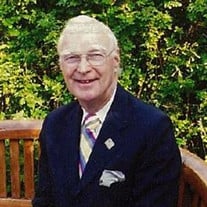 Marty Hamilton, 87, died peacefully on February 2nd at Doctors Hospital at Renaissance in Edinburg after suffering a heart attack in the early hours that day. Preceded in death by his wife of 59 years, Jackie Hamilton, he is survived by his children, Elizabeth Hamilton of McAllen, Joe Hamilton and his wife, Karen Kuwata, of South Salem, NY, his grandchildren Samantha Hamilton of New York City and Matthew Hamilton of Seattle and his siblings Helen Pat Bride and Charles Hamilton. W. Martin Hamilton was born in Little Rock, Arkansas to James and Florence Hamilton. Marty was active in sports and while in high school was a member of the Little Rock Doughboys, a prominent American Legion baseball club. He attended Texas A&M on a baseball scholarship, where he earned status as a Distinguished Student and lettered on Aggie teams that in 1951 were co-Southwest Conference champions and earned a trip to the College World Series as one of eight finalist teams. Graduating from A&M on May 30, 1952, he started work at IBM on June 2nd. He remained at IBM for 31 years. After a stint as a private first class in the United States Army from 1952-1954, he worked at IBM in sales and other positions, living with his family in Texas City, Dallas, Denver, CO, Poughkeepsie, NY, Huntington, NY and Ridgefield, CT. After moving to Ridgefield, Marty earned an MBA from New Haven University, and during his last fifteen years with IBM he taught new and middle managers in IBM's Corporate Management Development Program. He thrived teaching management principles, receiving many acknowledgments of his contributions to the program, including status as a Master Teacher. Resigning from IBM in 1983, he was recruited to join other IBMers in a management consulting practice, serving clients in the U.S. and abroad until his retirement in 1988. That year, after fifteen years in Ridgefield, Marty and Jackie relocated to McAllen, where Jackie grew up and where they enjoyed the warm climate and ability to golf year round. Marty enjoyed golfing with a regular foursome at the McAllen Country Club, and played several days a week there, bagging seven holes-in-one there over the years. He liked to tell others that “as habits go, golf is not a bad one” and, although he won tournaments along the way, he always credited his wife as being the family champion, as she had won more tournaments than him. He was on the course with his regular group the day before he passed away. Marty was an unfailingly optimistic and buoyant presence in the community who loved, and was loved for, offering encouragement to his fellow friends, church members and acquaintances. He was active in McAllen's First United Methodist Church, where he enjoyed teaching and participating in Sunday school classes and working on many church mission work projects such as Cornerstone Projects and the Food Pantry. For several years he taught business courses at Texas-Pan American, as well as ESL and reading classes at local schools, and served on the advisory boards of the Salvation Army and McAllen Miller International Airport. Marty was an active volunteer to the end of his life in Valley programs such as the HOST program and McAllen Medical Center. A memorial service will take place at 12:30 p.m. on Friday, February 9, 2018, at First United Methodist Church of McAllen. In lieu of flowers, donations may be given in Marty's memory to First United Methodist Church of McAllen or the Kenya Self-Help Project (kenyaselfhelp.org).

Marty Hamilton, 87, died peacefully on February 2nd at Doctors Hospital at Renaissance in Edinburg after suffering a heart attack in the early hours that day. Preceded in death by his wife of 59 years, Jackie Hamilton, he is survived by his... View Obituary & Service Information

The family of Marty Hamilton created this Life Tributes page to make it easy to share your memories.