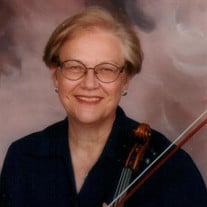 Born on the shortest day of 1945, December 21st, Martha Kyle was a Kansas girl, the youngest child and only daughter of Tug and Grace Kyle. She grew up in Wichita, lived in many places, loved cats and playing the violin, and died in McAllen, Texas on May 16 , 2018. After graduating from Wichita's East High School where she was an outstanding violinist, she attended Southwestern College in Winfield, Kansas. As a violin major she studied with Ross Williams and earned a Bachelor of Music degree, cum laude, in 1967. She completed a Master of Music degree at Louisiana State University (LSU) in 1969 and then moved to Germany where she played violin professionally in the Pfaelzische Philharmonie for five seasons. She returned to LSU and completed a Doctor of Musical Arts degree in Violin Pedagogy under the guidance of Dinos Constantinides in 1982. She played violin in the New Orleans Philharmonic Orchestra, the Monroe, Baton Rouge, and Shreveport Symphonies in Louisiana. While pursuing her doctorate, she was an instructor at Northeast Louisiana University in Monroe. Martha moved to Russellville, Arkansas, and was a public school string specialist, while also playing in the Arkansas Symphony Orchestra in Little Rock, for three years. When her father developed health problems, she moved to Hays, Kansas, and was an Assistant Professor in the department of music at Fort Hays State University. In 1990 she moved to McAllen, Texas, and was a public school orchestra director in McAllen and in Edinburg for 20 years. She was a mainstay of the first violin section of the Valley Symphony Orchestra until 2012 and performed with many other ensembles and in recitals in the area. She was also a member of the McAllen Music Club. Martha was diagnosed with Alzheimer's Disease in 2008.Martha is survived by two older brothers: Philip Kyle in Jetmore, KS, and Craig Kyle in Canada. She was lovingly cared for by Carmen Trevino, who was assisted by Lyzette Trevino Garcia, Azucena Trevino, and Laura Flores Trevino and the entire Trevino family, for the final years of her life. Thanks to them and The Bridges at Mission and Waterford Gardens for making those years as good as possible. Vanessa Peveto and the Frost Bank Trust Department advised and provided management for her business affairs. Her friend, Linda Sobin, tried to keep her life comfortable and meaningful when she became unable to take care of herself. Visitation will be Friday May 18, 2018 beginning at 6:00 PM with a Memorial Service at 7 PM at Kreidler Funeral Home. Manny Gutierrez will provide the meditation and a string quartet of friends/colleagues/former students will provide music. She will be interred in her beloved home state-Kansas. In lieu of flowers, honor her memory by contributing to the support of the Valley Symphony Orchestra, PO Box 2832, McAllen, TX 78501. kreidlerfuneralhome.com

Born on the shortest day of 1945, December 21st, Martha Kyle was a Kansas girl, the youngest child and only daughter of Tug and Grace Kyle. She grew up in Wichita, lived in many places, loved cats and playing the violin, and died in McAllen,... View Obituary & Service Information

The family of Martha Kyle created this Life Tributes page to make it easy to share your memories.