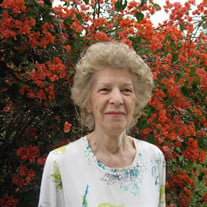 Always a woman of strong faith, Marion Rogers passed away after a brief illness at the age of 97. Like so many of the Greatest Generation, she was a child of the Depression, a patriotic Navy wife and a devoted mother who served her family, her church, and her community. As a student in Harrison, Ohio, Marion was both an athlete and a scholar. She prided herself on being able to quote lengthy poetic passages unto her final days. Growing up with six brothers and an older sister taught her perseverance to hold her own as the baby sister, a trait which served her well throughout life. After her father’s unexpected death, she moved from Ohio to Edinburg where she attended Pan American College and met Ray Rogers from McAllen. She was 17 when they married, a union which endured for almost 70 years. She and Ray raised two children, actively supporting their school, Scouting, and musical endeavors. As a member of First Church of Christ, Scientist in McAllen, Marion served in numerous capacities in the church from the 1940’s until the twenty first century. In 1974 she earned her Real Estate License and was later appointed as the first woman on the McAllen Zoning Board. Ray and Marion worked together in real estate and enjoyed traveling, always putting their family first. Shortly after Ray’s death in 2008, Marion moved to Waterford Gardens in Mission, where she enjoyed the care, company, and beautiful flowers, something she had had a talent for all her life. Marion is survived by her daughter Marilyn Rogers Martin (Raymond) of Nome, four grandchildren (Suzanne Martin Simmons, Jeffrey Rogers Martin, Leslie Martin Burch, and Steven Avery Rogers) and eight great grandchildren (Crystal Rogers Howard, Emerald Mae Rogers, Amethyst Rae Rogers, Avery Lea Rogers, Kacie Jae Rogers, Christopher Martin, Hannah Martin, and Alyssa Kelley). She is predeceased by her parents Frank and Ethel Nichols, her brothers Carl, Phil, Earl, Frank, Hugh and Charles and her sister Martha Rose Newhouse, as well as her husband Ray Rogers, son Donald Ray Rogers, grandson Donald Ray Rogers, Jr., and an infant grandson. They embody and remember her lifelong courage, talents and generous spirit. Visitation will be held Wednesday, June 13, 2018 from 6-8 p.m. Funeral service will be 9:30 a.m. Thursday, June 14, 2018 at Kreidler Funeral Home. Burial will follow at RGV State Veterans Cemetery on south Inspiration Rd., Mission, TX.

Always a woman of strong faith, Marion Rogers passed away after a brief illness at the age of 97. Like so many of the Greatest Generation, she was a child of the Depression, a patriotic Navy wife and a devoted mother who served her family,... View Obituary & Service Information

The family of Marion Rogers created this Life Tributes page to make it easy to share your memories.

Always a woman of strong faith, Marion Rogers passed away after...