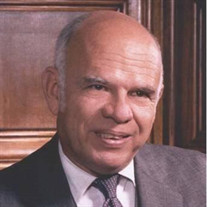 Dr. Mario E. Ramirez was born in Roma, Texas in 1926 to Efren and Maria del Carmen Ramirez. He attended school in Roma and Rio Grande City, completed high school at the age of 16 and went on to attend the University of Texas at Austin. He was accepted to medical school at the University of Tennessee remarkably before completing his undergraduate degree. He then went on to complete his medical studies at the young age of 22, followed by residency in the general practice of medicine at Shreveport Charity Hospital. While doing his residency, he met the love of his life, Sarah Aycock, a young student nurse. They married in Roma where they began a medical practice together, which lasted more than 50 years. He was preceded in death by his loving wife, Sarah, and together they are survived by their five children who they were extremely proud of: Judge Mario E. Ramirez (Noelia), Patricia A. Kittleman (Wes), Dr. Norman Ramirez (Liza), Dr. Jaime Ramirez (Hilary) and Roberto L. Ramirez (Irene). He is also survived by his two siblings, Roel and Carmensa, and preceded in death by younger brother Efren, Jr. Dr. Ramirez and his wife practiced in Roma for five years delivering many children before enlisting in the United States Air Force. He served two years in Japan as a physician, leaving the service with the rank of Major.He returned to Roma where he established the Manuel Ramirez Memorial Hospital, which grew to a 21-bed hospital that provided all services, including major surgeries and obstetrics.Over 50 years of practice, he delivered thousands of children. A large percentage of his practice was charity-based and included daily house calls over a 50-mile radius. He often was paid with nothing more than the goodwill of his patients.During that time, he also served as Starr County Judge where one of his greatest accomplishments was the creation of the 50-bed Starr County Hospital. Over the course of his career, he was a champion of medical education, mentoring numerous medical students, residents and other healthcare professionals.He was extremely proud of having founded the Med-Ed Program that encouraged many Rio Grande Valley high school students to go on to medical careers. Over his lifetime, he received numerous awards and was recognized by his medical peers on many occasions. These achievements included being elected the President of Texas Academy of Family Physicians and being the first Hispanic elected to be president of the Texas Medical Association. He received the Bicentennial Benjamin Rush Award for Citizenship and Community Service by the American Medical Association as well as the Family Doctor of the Year Award sponsored by the American Academy of Family Physicians, presented by President Carter at the White House in May 1978. He was an extremely proud Texas Longhorn who was awarded the Distinguished Alumnus Award from the University of Texas at Austin, and he was honored to have been appointed to the Board of Regents of the University of Texas System from 1988 to 1995. Much can be said about Dr. Ramirez’s accomplishments and awards but not enough can be said about the lives he touched and the love and respect that countless people have for him. He was loved and will be greatly missed by his children, grandchildren and great grandchildren. The family would like to extend their heartfelt gratitude to Dr. Ramirez' excellent and loving caretakers, Rick Fernandez Care Assistance: Rick Fernandez, Toby Ojeda, Noe Hernandez, Heri Hinojosa, Ayhan Souter. Visitation will take place Wednesday, May 24, 2017 at Our Lady of Guadalupe Catholic Church, 620 N. Dunlap in Mission from 6pm to 9pm, with a Rosary at 7pm. Mass of Christian burial will be on Thursday, May 25, 2017 at 1:30pm at Our Lady of Sorrows Catholic Church in McAllen. Contributions can be made in Dr. Ramirez’s honor to Hope Family Medical Center, 2332 W. Jordan RD, McAllen,TX 78503 and Comfort House,617 W. Dallas Ave., McAllen, TX 78501.

Dr. Mario E. Ramirez was born in Roma, Texas in 1926 to Efren and Maria del Carmen Ramirez. He attended school in Roma and Rio Grande City, completed high school at the age of 16 and went on to attend the University of Texas at Austin. He was... View Obituary & Service Information

The family of Dr. Mario Ramirez created this Life Tributes page to make it easy to share your memories.