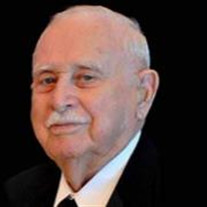 Mario Hinojosa Sr. “Big Papa” entered into eternal rest on October 28, 2017 at the age of 91. He was surrounded by family and loved ones at Alfredo Gonzalez Texas State Veteran’s Home. He is preceded in death by his wife of 52 years, Olga Victoria; his parents, Fidel and Del Fina Hinojosa; his sister, Adelina Mora; and his brothers, Victervo, Servando, Armando, and Adalberto Hinojosa. He is survived by children, Mario Hinojosa Jr, (Sandra) of McAllen, Melissa Overholser (Herman) of Houston, Rudy Hinojosa (Dawn) of Plano, Mari Yancy (David) of McAllen, and Carlos Hinojosa of McAllen; as well as his sister, Alicia Aparicio of Corpus Christi. He loved and cared for his granddaughters and is survived by Valerie (Johnny) Nevarez of McAllen, Ashlee (Danny) Wilcox of Houston, Stacie Overholser of Houston, Sarah (Adrian) Mejorado of McAllen, Brooke Yancy of Denver, Courtney Yancy of Houston, and Carlyn Hinojosa of Austin. His great granddaughters were his pride and joy and is survived by Sophia and Cecilia Claire Nevarez of McAllen and Kate and Emmy Li Wilcox of Houston. Mario was born on August 11, 1926 in the Santa Monica Ranch in Puerto Rico, TX. He served with distinction in the US Army in Japan, Korea, and Germany. Upon discharge, he began employment in the federal government, eventually retiring from the U. S. Postal Service in 1985. Upon retirement, Big papa and his wife Olga purchased and operated Mario’s Meat Market in Sullivan City, TX. Finally, in 1995, they sold their business and officially retired from work. Mario and Olga enjoyed traveling with family and friends. Big papa had two passions, his family and bowling. He participated in many bowling tournaments throughout the United States. The Celebration of his life will take place at Kreidler Funeral Home on Wednesday, November 1, 2017 with visitation hours from 6 to 8 PM, with a rosary at 7 PM. The funeral mass will be held at Sacred Heart on Thursday, November 2, 2017 at 9:30 AM, with interment followed at the Rio Grande Valley State Veterans Cemetery in Mission, TX. The family would like to extend our heartfelt gratitude to the staff at Alfredo Gonzalez Texas State Veteran’s Home for the unconditional love and care that they provided for Big papa. He loved all that cared for him including: Liza, Cipriano, and Dina. Gracia Hospice Care provided our family with support and strength that was greatly appreciated during our time of need.

Mario Hinojosa Sr. &#8220;Big Papa&#8221; entered into eternal rest on October 28, 2017 at the age of 91. He was surrounded by family and loved ones at Alfredo Gonzalez Texas State Veteran&#8217;s Home. He is preceded in death by his wife of... View Obituary & Service Information

The family of Mario Hinojosa Sr. created this Life Tributes page to make it easy to share your memories.