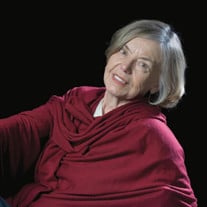 Professor Marian F. Monta, age 88, of Edinburg died on July 15, 2020 peacefully at her home. A Virginia native, she lived in Edinburg since 1971. Professor Monta was the area head of theatre-TV-film in the Communication Department at The University of Texas Pan American. She came to the university in 1971. For many years she served as Chair of the Communication Department. Retired in May of 2007, she was awarded the title of Professor Emeritus by The University of Texas System Board of Regents. She continued to serve the department in a variety of voluntary capacities after her retirement. She received Bachelor's and Master's degrees from Fordham University, and her Ph.D. from Cornell University, where she was the first woman in her field to get a Ph.D. Professor Monta directed over 150 plays of all types and served actively on many national organizations concerned with the arts. She was a theatre panelist for the Texas Commission on the Arts and a grant reader for the National Endowment for the Humanities. She served as President of the Southwest Theatre Association. She lectured around the world and had been invited to lecture on every continent. In 1989, and again in 1996, she received the Outstanding Faculty Award from the University, and in 1990, she received the Alumni Association Distinguished Faculty Award. Professor Monta was selected in 1994 to be a member of the College of Fellows, the lifetime achievement award of the Southwest Theatre Association. In 1999, she was the first recipient of the Southwest Theatre Association's Outstanding College-University Theatre Teacher award. In 2001, she was given the Shining Star Award by the Zonta Club of Hidalgo County in recognition of her efforts in the area of education. She was also listed in Who's Who. An active supporter of the University, she was a member of the President's Club, the University of Texas Chancellor's Council and, in 1998, received the UTPA Foundation Founder's Day Medal. Her areas of research interest included musical theatre and Spanish Golden Age theatre. She was one of the first professors in the country who taught a number of classes that combined theatre and television production. She also taught arts management, speech for stage and screen and dramatic literature classes. In 2008, she published a textbook Directing for Stage and Screen, co-authored with Dr. Jack R. Stanley. Marian is survived by her daughter Susan Smith and son in law Michael Padgett of McAllen; two brothers William Monta, a native of Hampton Virginia, and Thomas Monta of McAllen; and brother in law Carl Monk of New Jersey. She was preceded in death by her parents and her sister Helen Monk of New Jersey. She is also survived by a number of cousins in Virginia. A celebration of her life will be announced at a later date when we can gather together responsibly. In lieu of flowers, donations to the Marian F. Monta Endowed Theater Scholarship at the University of Texas Rio Grande Valley, EITT-1.210, 1201 W. University Dr. Edinburg TX 78539 would be appreciated.

Professor Marian F. Monta, age 88, of Edinburg died on July 15, 2020 peacefully at her home. A Virginia native, she lived in Edinburg since 1971. Professor Monta was the area head of theatre-TV-film in the Communication Department at The University... View Obituary & Service Information

The family of Marian F. Monta created this Life Tributes page to make it easy to share your memories.