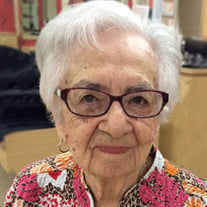 Maria Elia Salazar Richardson was born in Premont, Texas on June 13,1914 to Calixto and Rita Salazar. She passed away at the grand age of 103 on January 16, 2018 in Austin, Texas. She was the second oldest of 6 children, 4 of whom predeceased her along with her parents. Maria met her husband Jay Richardson while working at the local drugstore in Premont, Texas. They married and later resided in Alamo, Texas. Maria worked for Dr. Lauro G. Guerra for over 35 years and later was a long time volunteer at the McAllen Medical Center Gift Shop. She was a member of the Pan American Round Table and The Order of the Eastern Star San Juan Chapter where she was Worthy Matron several times. Maria made a very loving home for her family while working a full time job. She loved to sew and bake and was famous for her pies, cinnamon rolls, and date loaf candy. She lived more than 30 years as a widow and traveled extensively to Germany to visit her son Floyd (while he was stationed there with the Air Force) as well as Italy, Mexico, cruised to Hawaii and Alaska all while making numerous trips to see her family. Maria was predeceased by her loving husband of 36 years, Jay. She is survived by her sister Alma Salazar, daughter Betty (Marshall) Kuykendall, daughter Bonnie (Jimmy) Kirkpatrick, son Floyd (Shari) Richardson, and daughter Martha (Mike) Huser, her 6 grandchildren Kimberly Mielcarek, Matthew Mielcarek, Wade (Gracie) Kirkpatrick, Amanda (Jesse) Wolgamott, Jarrod (Tricia) Huser and Michael (Gena) Huser, her 6 great grandchildren Madison, Baley and London Huser, Kaden Kirkpatrick, and Jack and Hank Wolgamott. The family will receive friends on Monday, January 22, 2018 from 5:00pm-6:00pm at Kreidler Funeral Home followed by a rosary from 6:00pm-7:00pm. A funeral service celebrating her life will be held the following day on Tuesday, January 23, 2018 at 10:00am at Our Lady of Sorrows Catholic Church, 1108 W Hackberry Ave, McAllen, Texas. with burial to follow at Roselawn Cemetery. Maria’s profound faith was apparent in her daily life. She always had a smile on her face and a twinkle in her eye. She was a loving wife, wonderful mother, caring sister, a fantastic Mimi and a loyal friend. She will be greatly missed by all.

Maria Elia Salazar Richardson was born in Premont, Texas on June 13,1914 to Calixto and Rita Salazar. She passed away at the grand age of 103 on January 16, 2018 in Austin, Texas. She was the second oldest of 6 children, 4 of whom predeceased... View Obituary & Service Information

The family of Maria Elia Richardson created this Life Tributes page to make it easy to share your memories.