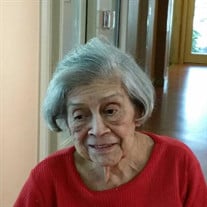 Maria Ninfa De Leon Munguia, 88, entered the Lord's kingdom on August 7th, 2016. She was born to Juan and Andrea de Leon. She was the youngest of twelve children. She married the love of her life, Sergio Ernesto Munguia Sr. Together they raised their family in McAllen, Texas. Her children were her devotion and adoration. She is survived by her four sons; Sergio Ernesto(Norma) from Austin, Sebastian Alfredo(Sara Elizabeth) from McAllen, Guillermo(Emma) from Pharr, and Alejandro Alvaro(Sara) from McAllen. She is also survived by ten grandchildren, Sergio Ernesto III, Melinda Monica, Priscilla, Marco Antonio, Leah Raquel, Erica, Guillermo "Willy" II, Alfredo Ernesto, Marissa Elizabeth and Andrea Munguia. Nine great grandchildren and one great great granddaughter. Ninfa, as she was known, was born in Pharr, but was raised in Reynosa Tamps. Mexico. She attended school there and she enjoyed spending time with her friends at "La Plaza" in Reynosa. On one of those memorable days, is when she met an amazing man who stole her heart. They married and decided to come to the United States to begin their lives together. While her husband Sergio worked tiredlessly. Ninfa was devoted to her home and children. Together they built a successful marriage and life together. She was meticulous in everything that she did. She was always the life of the party and as soon as the music began, she was ready with her dancing shoes. God blessed her with sons, so she was the queen of her home. Ninfa is now reunited with the love of her life, and together once again forever. At this time, with sincere gratitude to McAllen Heart Hospital, McAllen Nursing Center, and lastly Amara Hospice. Thank you for your amazing dedication and empathetic heart for our beloved Ninfa. Thank you for easing our pain with your true compassion. A rosary will be Monday, August 8, 2016 at 7:00 pm. Visitation is from 6:00 pm to 8:00 pm. at Kreidler Funeral Home. Funeral service will be held Tuesday, August 9, 2016 at 11:00 AM at St. Margaret Mary Catholic Church in Pharr, Tx.

Maria Ninfa De Leon Munguia, 88, entered the Lord's kingdom on August 7th, 2016. She was born to Juan and Andrea de Leon. She was the youngest of twelve children. She married the love of her life, Sergio Ernesto Munguia Sr. Together they raised... View Obituary & Service Information

The family of Mrs. Maria Ninfa Munguia created this Life Tributes page to make it easy to share your memories.