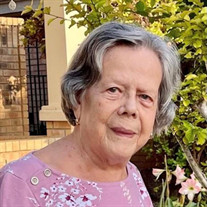 Maria del Carmen Ramirez Guerrero, beloved wife, mother, grandmother, and great-grandmother, passed away on October 27, 2021, in McAllen, Texas, surrounded by her family. She was 92 years-old. She was preceded in death by her loving husband of 64 years, Raul Guerrero, by her cherished son, Raul Ricardo Guerrero, by her parents, Efren Manuel Ramirez and Carmen Hinojosa Ramirez, by her brothers, Efren M. Ramirez, Jr., Mario E. Ramirez, and Roel R. Ramirez, and by her sisters-in-law, Sarah A. Ramirez and Frances G. Ramirez. She is survived by her children, David J. Guerrero, Maria Teresa Guerrero, Ana Maria G. Reed (Roger Reed), Carmen G. Garcia (Carlos Garcia), and Alberto L. Guerrero (Kirsten Vinson), and daughter-in-law, Rosalva V. Guerrero, all from McAllen, as well as ten grandchildren, two great-grandchildren, and many nieces and nephews. Carmen, like her late husband, Raul, was descended from a pioneer family in what later became Starr County. Carmen and Raul were married in Roma, Texas, in 1949 and lived throughout South Texas while Raul worked for the U.S. Soil Conservation Service. They eventually settled in Rio Grande City, where they raised their family. For many years, Carmen owned and operated the Ramirez Gift Shop in Rio Grande City. After Carmen and Raul retired, they moved to McAllen to be closer to their children and grandchildren. Carmen very much enjoyed cooking and preserving old family recipes, including the renowned "Grandmother's Cornbread" (white corn only, never yellow) and poblano rice with crema (attempted by others, but never matched). She was a skilled seamstress and enjoyed sewing, crocheting, and needlework. Her grandchildren and great-grandchildren treasure the blankets and doll clothes that she made for them. Carmen also was a voracious reader, very much enjoying Leila Meachem novels set in Texas. Carmen especially looked forward to large family gatherings on weekends and holidays, eagerly anticipating visits by her grandchildren, great-grandchildren, and extended family. A Mass of Christian Burial in memory of both Carmen and her recently deceased son, Raul Ricardo, will be celebrated on Tuesday, November 2, 2021, at 10:00 a.m. at Our Lady of Guadalupe Catholic Church at 620 N. Dunlap Ave. in Mission, Texas, with Father Roy Snipes, O.M.I., officiating. Joint interment will follow immediately at Roselawn Cemetery in McAllen, Texas. Masks are required. Kreidler Funeral Home is in charge of arrangements. In lieu of flowers, the family suggests memorial contributions to pancan.org to support the fight against pancreatic cancer.

Maria del Carmen Ramirez Guerrero, beloved wife, mother, grandmother, and great-grandmother, passed away on October 27, 2021, in McAllen, Texas, surrounded by her family. She was 92 years-old. She was preceded in death by her loving husband... View Obituary & Service Information

The family of Maria del Carmen Ramirez Guerrero created this Life Tributes page to make it easy to share your memories.