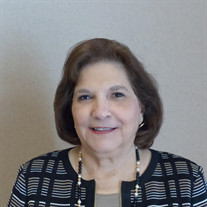 Maria Cecilia (Gutierrez) Martinez entered eternal rest on Monday, October 28, surrounded by family at Rio Grande Regional Hospital. She was born in Rio Grande City, TX on March 8, 1945 to her loving parents, preceding her in death, Ignacia Guerra Gutierrez and Ignacio Gutierrez. Cecilia was a graduate of Rio Grande High School (1963) and continued her education to receive a Bachelor of Science in Pharmacy at the University of Texas at Austin in 1968. As a registered pharmacist she worked at both Bexar County Hospital and Santa Rosa Hospital in San Antonio, TX. She relocated to Houston, TX where she had a rewarding career at MD Anderson and married her husband of 41 years, Edmundo Manuel Martinez, DDS. In 1979, after the birth of their first daughter, Cecilia and Edmundo made McAllen, TX their home where she managed the dental practice they established for decades. Cecilia passionately supported music and visual art, playing the piano from a young age and avidly collecting art pieces from artists locally and around the world. She and Edmundo greatly enjoyed international travel and the outdoors, imparting a sense of adventure and independence in their daughters. She enjoyed active membership in the Pan American Round Table and the Catholic Daughters in the Rio Grande Valley. Close family and friends will always remember her strong sense of justice and generous spirit. Maria Cecilia Martinez is survived by her husband, Edmundo Manuel Martinez, DDS; and her daughters Sara Cecilia Martinez, MD, PhD (Tim West) and Lilia Estela Martinez Cyr, DDS (Bryan Cyr). She adored her grandchildren Markus Alexander and Liv Marie West. She is also survived by her siblings; Maria Celeste (Ramiro) Narro, Jose Ignacio (Esther) Gutierrez, Maria del Rosario (Bill) Pope, Maria Minerva (Ignacio) Guerra, and Maria Iris (Ernesto) Trevino. The family would like to extend a sincere appreciation to dear lifelong friends. Visitation will be held at Kreidler Funeral Home in McAllen, TX from 6-8:00pm with Rosary at 7:00pm on Wednesday, October 30th. Funeral Mass will be held at Our Lady of Sorrows Catholic Church at 10:00am on Thursday, October 31st. Interment will occur in San Antonio, TX with service at Mission Park Funeral Home- North on Cherry Ridge at 12:00pm on Friday, November 1st, followed by procession and burial at Holy Cross Cemetery.

The family of Maria Cecilia (Gutierrez) Martinez created this Life Tributes page to make it easy to share your memories.