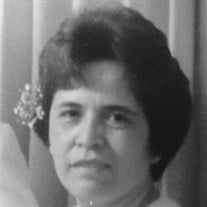 Many people talk about putting others before themselves. Maria Elena Castillo didn’t just talk about it, she lived it. María Elena died Wednesday, April 26, at her home in McAllen after a long illness. She was in the company of her beloved family, including her devoted husband of 61 years, Juan. Maria Elena was 79. No one benefitted more from Maria Elena’s giving and selfless spirit than her family. She was dedicated to improving their lives, unfailingly putting them before her own needs, always making sure they had what they needed to succeed. When she could have reached milestones in her own nursing career, instead she reveled in the achievements of her children and grandchildren, and in supporting her husband, a longtime and well-known McAllen barber. A McAllen native, Maria Elena served her community too, as a nurse for more than 22 years, first at McAllen General Hospital, then in private practice with Dr. Forrest Fitch and Dr. Juan Trevino. A devout Catholic, Maria Elena volunteered in the church, teaching Catechism to young students. In the 1960s, Maria Elena and Juan walked South McAllen neighborhoods, raising money for a new church, St. Joseph the Worker, which they and their neighbors helped to found. Maria Elena did all of these things with her signature kindness, a warm smile and a humble and generous ability to listen and to empathize with others. Besides her husband, Maria Elena is survived by her sister, Margarita Lanfranco; three children, Ruth of McAllen, Juan Jr. and Ricardo of Austin; daughter-in-law, Kathy Vale Castillo of Austin, and son-in-law, Eloy Garcia of McAllen; grandchildren, Monica Elizabeth Castillo of San Antonio, Lauren Garcia and Eloy Garcia Jr. of McAllen, and Maya Nunez of Houston. Maria Elena was preceded in death by her parents, Pedro and Francisca Liscano; and brothers, Pedro Jr. and Manuel. Rosary will be recited Friday, April 28 at 7 p.m. at Kreidler Funeral Home in McAllen, with Visitation beginning at 6 p.m. to 8 pm. Funeral Mass will be celebrated Saturday, April 29 at 1:30 p.m. at Our Lady of Sorrows Catholic Church in McAllen, where Maria Elena was a devoted member. Burial will follow at Valley Memorial Gardens Cemetery.

Many people talk about putting others before themselves. Maria Elena Castillo didn&#8217;t just talk about it, she lived it. María Elena died Wednesday, April 26, at her home in McAllen after a long illness. She was in the company of her beloved... View Obituary & Service Information

The family of Maria Elena Castillo created this Life Tributes page to make it easy to share your memories.

Many people talk about putting others before themselves. Maria...