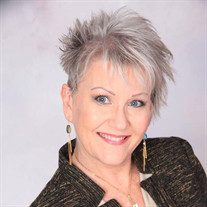 Margaret "Maggie" Evalin Hammond, 61, passed away on February 9, 2016, at Rio Grande Regional Hospital in McAllen TX, after a courageous 7 year battle against breast cancer. She was born in Houston, TX, on August 25, 1954, as one of four children of Robert "Lendy" and Dorothy McDonald. After retiring in 1970, her parents relocated to the Rio Grande Valley where Maggie lived and loved for 46 years. In 1972 she was married to her sweetheart Ernest “Ernie” Hammond in Los Fresnos, TX, and in 1974 their eldest son, Joshua Hammond, was born. In 1980, their youngest son, Carl Hammond, was born. The family resided in Los Fresnos, TX for over two decades and later moved to McAllen, TX where they currently reside. Maggie created a decades long business with Mary Kay Cosmetics. She rose to become a Senior Sales Director by recruiting and inspiring a lively unit of Mary Kay representatives. She achieved numerous honors, awards, and recognition for her impassioned and dedicated work that followed the philosophy of Mary Kay Ash through Mary Kay Cosmetics of “inspiring, enriching and empowering women to do great things”. She was a member of Palm Valley Community Church in Mission, TX and a longtime member of Bible Study Fellowship International at the First Baptist Church in McAllen, TX. Maggie is survived by her devoted husband of 43 years, Ernie Hammond originally of Houston, TX; her sons Joshua Hammond and Carl Hammond; 8 grandchildren Noah, Amelia, Clara, Tyler, Laizcha, Ethan, Brandon, and Gavin. She is also survived by siblings and (in-laws), brother Vance (and Denise) McDonald of Austin, TX; sister Bobbye (and Joe) Dowda of Taylor, TX; and brother Tyler (and Polly) McDonald of San Diego, CA. She also leaves several loving nieces, nephews, and near and dear friends. Memorial services will be held at 4PM on Saturday, February 13, 2016 at Kreidler Funeral Home, 314 N. 10th St., McAllen, TX 78501 Memorial gifts in Margaret Hammond's memory can be made to the American Cancer Society in her name.

Margaret "Maggie" Evalin Hammond, 61, passed away on February 9, 2016, at Rio Grande Regional Hospital in McAllen TX, after a courageous 7 year battle against breast cancer. She was born in Houston, TX, on August 25, 1954, as one of four children... View Obituary & Service Information

The family of Margaret "Maggie" Evalin Hammond created this Life Tributes page to make it easy to share your memories.