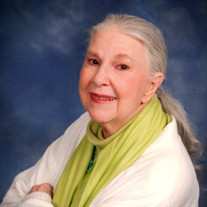 Margaret Elizabeth Moore Baltis was born April 12, 1929 in Monroe, Louisiana and passed away November 8, 2018 in McAllen, Texas. Margaret spent her early childhood in Homer, Louisiana with her parents and two brothers where her inspiration for her short stories came to fruition in the idyllic setting of country living and small town drama shaped by the Great Depression. Her adolescence was spent in Jennings, Louisiana where her love of literature, world travels, and educational aspirations began to formulate. While attending McNeese Junior College, Margaret met a dashing blond, blue eyed airman( Gary Baltis) and began a 52 year romance that took them on travels across the United States, Mexico, Central America, England, Ireland, Europe, and the Middle East. Margaret and her husband, Gary, traveled to 17 countries even making friends that came to visit them in the States. For 13 summers, they made England their home base for all their adventures. After completing her Bachelor's Degree in English at Pan American College, Margaret taught in Mission ISD, Sharyland ISD, and McAllen ISD. Eventually, she completed her Master's in English at McNeese State College while holding an English Teaching Fellowship. The next twenty-five years she spent as a professor of English at Pan American University (UT-RGV). During those years she continued her educational pursuits in Cambridge, England(Jesus College) and Trinity University in Dublin, Ireland. In 1979, Margaret traveled to China with a scholarship sponsored by Delta Kappa Gamma observing the Chinese educational system for a month while traversing that immense country. At other times, Margaret also attended religious seminars in Dublin, Ireland and Cambridge, England as well as many English conferences across the United States. Even in retirement, she found time to be active with other retired educators. Back in McAllen, Margaret spent over 60 years being active in community projects with Delta Kappa Gamma Education Society, PEO, Junior Service League as well as a regular at Reviewer's Guild where she could review her love, the written word. She would often share her poetry and prose and eventually published a series of short stories of her childhood titled, ' The Betty Stories'. For 63 years, Margaret was a member of First Methodist where she taught Bible classes and served her faith based family in various capacities. Margaret would tell you her greatest joy was her 50 years of marriage to Gary Baltis and the family they shared. In the Forward of her book, 'The Betty Stories', she wrote, "I want to thank my childhood family, my mother, my father, and my two brothers. And of course, my own family, my children, my grandchildren, and my great-grandchildren...it is all about family." Margaret is predeceased by her parents, Thomas D. Moore, Louise Coleman Moore; her brothers, Tom Moore and Bobby Moore; her husband, Gary M. Baltis, Sr; her children, Brad Baltis, Barbara Baltis, and Gary M. Baltis, Jr. She is survived by her daughter, Elizabeth B. Voss( husband, Steve); her grandchildren, Matthew Voss( wife, Meg), Austin Voss, Michelle Voss, Dustin Baltis( wife, Sor), and Brandon Baltis; her great grandchildren, Lauren Voss, Emily Voss, Blake Voss, Scarlett O'Brien, Lila Voss, and Joshua Voss. A Memorial will be held at Kreidler Funeral Home on Monday November 19, 2018 at 10 a.m. In lieu of flowers, please send donations to PEO chapter CE at 4705 North 9th, McAllen, TX 78504 in memory of Margaret Baltis for the scholarships for women's education.

Margaret Elizabeth Moore Baltis was born April 12, 1929 in Monroe, Louisiana and passed away November 8, 2018 in McAllen, Texas. Margaret spent her early childhood in Homer, Louisiana with her parents and two brothers where her inspiration for... View Obituary & Service Information

The family of Margaret Elizabeth Baltis created this Life Tributes page to make it easy to share your memories.