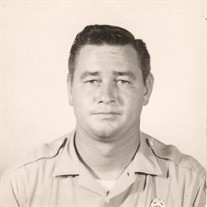 On Thursday, February 8, 2018, Jesus called, he needed another angel. Lloyd Joe (Jody) Johnson died at Doctors’ Hospital Renaissance in Edinburg, Texas. Born in Edinburg on September 18, 1942, he attended Edinburg public schools, graduated from Edinburg High School in 1960, and attended Texas Lutheran University in Seguin, Texas. While at Edinburg High School, Jody was a proud Bobcat playing football and baseball all four years. He was a Sergeant with the Edinburg Police Department for 11 years. Before retirement, Jody worked in the citrus industry for 40 years. He was an avid hunter and fisherman spending much time with his grandsons Steven and Ryan, teaching them how to hunt deer and javelina. In his later years, Jody found the time spent with his grandchildren to be his most favorite moments. He never hesitated to let them know how proud he was of them in all that they did. He could be seen at band performances, football, baseball, and soccer games, to proudly support his grandchildren. Mr. Johnson is preceded in death by his father, Roy Verlon Johnson and his mother, Elvie Johnson. He is survived by a daughter, Cynthia Jo Johnson VanNest of McAllen; a brother, Dale (Cindy) Johnson of McAllen; grandchildren, Steven Scott, Kathryn Scott, Schuyler VanNest, and Ryan (Chico) VanNest of McAllen; and numerous nieces and nephews. Mr. Johnson is also survived by his longtime friend, John Steele of Edinburg and close cousin and friend, Ralph Johnson of McAllen. A memorial service will be held at Kreidler Funeral Home in McAllen, Texas on Wednesday, February 14, 2018 beginning at 6:00 p.m. In lieu of flowers, the family requests that memorial contributions be made to a charity of choice.

The family of Lloyd Joe "Jody" Johnson created this Life Tributes page to make it easy to share your memories.