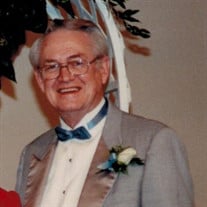 Letus F. Dodd passed away October 9, 2019 at DHR in Edinburg. Lee was born September 29, 1932 in Landis, Arkansas to Lester and Carrie Dodd. Landis was not really a town, just a settlement way out in the country. He attended high school in Mountain View, AR and attended two years at what was then Arkansas Teachers College in Conway, AR, it is now a branch of the University of Arkansas. They moved to Mountain View and stayed there several years. Lee and Sue were married January 1, 1966 in Wichita, KS. This coming January 1 would have been their 54th Anniversary. During his lifetime he had a three member singing group that sang the old southern gospel songs. This group was based in Wichita and opened every morning on a local radio station. They also had an early morning television show. Lee went to work at Beech in 1951 and retired (the first time) in 1992, went back in 1994 as a contractor sent to England, called back to the local facility where he spent 1995 and 1996 putting in a total of 44 years. He tuned pianos for 50 years all over the state of Kansas and he and Sue square danced for 25 years. He bought a Hudson from Sue's Dad and then joined the local Hudson club. From that he joined the International Hudson club with 4000 members in the US plus 31 foreign countries with all members owning at least one Hudson. He then became Director from the central region of the USA. From there he became President for 3 years, followed by being Director of Membership. That was followed by running the club store for the International Group. Lee ran a Miss Kansas preliminary pageant in the Miss America program and trained contestants from all over the state how to interview not only for a judge’s interview but for a future job. Lee and Sue also ran a Miss Center City Pageant, a Miss Kansas preliminary, for several years. Lee's favorite thing to do was to get involved in something, learn about it and then take on the running of whatever it happened to be. He was never content to just sit back and let someone else do it. He is survived by his wife, Sue, of 54 years, formerly of Weslaco, TX, brother, Davis of Bristol, CT; sons, John (Peggy) of Soldotna, Alaska and James of Oklahoma City; grandsons, Randall (Sarah) of Brookland and Colby (Sonya) now residing in Germany; and nephews, Rick Dodd of Manassas, Virginia and Danny (Linda) Dodd of Bristol, CT. Visitation will be held Friday, Oct. 11, 2019 from 2 to 4 PM at Kreidler Funeral Home, 314 N. 10th St. Funeral services will be held Saturday, October 12 at 10 AM at Maranatha Baptist Church, 1800 N. Ware Rd. Burial will follow at Roselawn Cemetery at 1201 S. Main St, McAllen, TX In lieu of flowers please make a donation in Lee's memory to the Maranatha Baptist Church, 1800 N. Ware, McAllen, TX 78501.

Letus F. Dodd passed away October 9, 2019 at DHR in Edinburg. Lee was born September 29, 1932 in Landis, Arkansas to Lester and Carrie Dodd. Landis was not really a town, just a settlement way out in the country. He attended high school in Mountain... View Obituary & Service Information

The family of Letus (Lee) F. Dodd created this Life Tributes page to make it easy to share your memories.