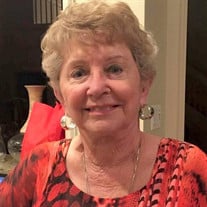 Letitia Lea "Tish" Arnold, age 84, passed away peacefully December 20, 2018 after a short battle with leukemia. She was born April 4, 1934 in Edinburg, Texas to Rufus Leamon and Mary Emaline (Horner) McMillon. She married the love of her life, Allen Arnold on June 13, 1952 who preceded her in death in 2013. Tish was born and raised in Edinburg, Texas, she loved her family, friends, and dogs. At an early age she took on the role of peace-maker in the family and continued that role until she died. She was an avid reader, loved playing bridge with the girls, enjoyed having lunch with the "lunch bunch", and traveled all over the world. Tish lived a wonderful life as a loving mother and homemaker, worked various jobs, including: Atlas and Hall Law firm, Texas Citrus Exchange, Nolana Animal Hospital, and Burns Motors. She continued to have a close relationship with her bosses and co-workers throughout her life. Her life was a living example of her favorite Bible verse: "So now faith, hope, and love abide, these three; but the greatest of these is love." 1 Corinthians 13:13 ESV In addition to her devoted husband, Tish was predeceased by her parents; her sister, Susan Alexander; her nephew Lloyd Alexander; and her niece Rhonda McMillon Hlivko. Tish will live on in the hearts of her son Jeffrey Allen (Beth) of Edinburg; grandsons Jeffrey Allen II (Allison) and James Payson; son Jack Russell (Cindy) of San Antonio; granddaughters Jackie and Whitney; granddaughter Ashley Ingram; brother William (Pat) McMillon of Georgetown; a great-granddaughter Addison Ingram, two great-grandsons Wesley Ingram and Allen Arnold, two brothers-in-law T.C. Alexander and William (Bette) Arnold; two nephews T.C.(Laura) Alexander, Jr. and Taran (Amanda) Alexander; and one niece Valerie Orr. Memorial contributions in Tish's name, may be made to the Laurie P. Andrews PAWS Center 2451 N. Expressway 281 Edinburg, TX 78541.

Letitia Lea "Tish" Arnold, age 84, passed away peacefully December 20, 2018 after a short battle with leukemia. She was born April 4, 1934 in Edinburg, Texas to Rufus Leamon and Mary Emaline (Horner) McMillon. She married the love of her life,... View Obituary & Service Information

The family of Letitia Lea "Tish" Arnold created this Life Tributes page to make it easy to share your memories.