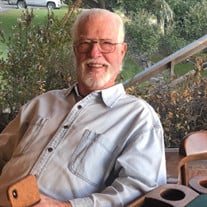 Lawrence Sexton Seal peacefully left this world Wednesday, August 26, 2020 in his sleep. He was born on May 4th, 1943 in Honey Grove, Texas and was the eldest of Lawrence and Ina Seal's five children. Larry was a proud Yellow Jacket and graduated from Edcouch Elsa High School; he went on to complete his bachelor's degree from The University of Pan American. After college, he served in the US Air Force and was honored with the Distinguished Flying Cross and life long friendships. His favorite time spent in the military was when he served with the US Air Force Thunderbirds as the pilot for the teams's transport aircraft. Larry used his experience flying to pursue a career as a commercial airline pilot for Eastern Airlines. His unforgettable charm and cigar, literally became the face of Eastern Airline's domestic and international ad campaigns. In the mid 80s, Larry retired from the airline industry and directed all his energy and focus toward growing South Texas Moulding into a successful business that supplied builders and homeowners throughout the Valley with finishing touches that made a house a home. Our Big Honey, Dad, Larry, Daddy-Big, Daddy-Pig, Fin, Ol' Lar, Uncle Larry and Gramps is survived by his wife, Jane Ann, his son, Lance (Elizabeth), his daughter, Flo (Brandon), siblings Dennis (Carol), Lynn (Gary), David (Marianne), Lock (Suzanne), his 5 grandchildren Layton, McCoy , Haden, Jonah, Finn, and many nieces and nephews, and life long friends. Larry and Jane Ann met on a blind date, and 6 months later promised each other to be a family forever, to live a life of adventure, and leave a legacy of integrity and love. They did it well for over 40 years. Larry loved to travel; he and his "navigator" Jane Ann explored the world together- most recently traveling around the world on a four and half month cruise. He instilled a love for traveling adventures in his children by committing to an annual "cold" vacation and a "hot" vacation. As a family we skied, sat on secluded beaches, drove through foreign country sides in rolling tin cans, found hidden towns full of beautiful people, and visited only a few cities along the way. Daddy Big made sure each of his grandchildren would learn to ski and snowboard and created a lifetime of memories in Colorado. Ol' Lar loved life, he could be "fitish" but will always be remembered chewing a cigar (a habit he had long given up), donning a brightly colored suit or shockingly bright socks. Fin enjoyed playing golf and dominos, working a crowd, and telling stories. Larry knew no stranger, but was no friend to a cheater, short payer or liar. Daddy-Big mercilessly teased his grandchildren, as it was his language of love. He called them names like, "Long Hair Hippie Weirdo," stole food off their plates, and smothered them with unsolicited hugs and kisses. His eyes twinkled with pride when his grandchildren finally learned to tease him back. We can all still hear his laugh. Oh, how he laughed. We love you just a little bit... Due to COVID-19, a private family service will be live streamed from St. John's Episcopal Church and School Facebook page: https://www.facebook.com/stjohnsmcallen on Thursday, September 3rd at 4pm. For anyone wishing to share their condolences, family will be outside Larry and Jane Ann's home between 7-9pm for a drive by reception. In lieu of flowers, please send memorial contributions to St. John's Episcopal Church and School McAllen where funds will be split between St. John's school and Vannie Cook Children's Clinic.

Lawrence Sexton Seal peacefully left this world Wednesday, August 26, 2020 in his sleep. He was born on May 4th, 1943 in Honey Grove, Texas and was the eldest of Lawrence and Ina Seal's five children. Larry was a proud Yellow Jacket and graduated... View Obituary & Service Information

The family of Lawrence Sexton Seal created this Life Tributes page to make it easy to share your memories.