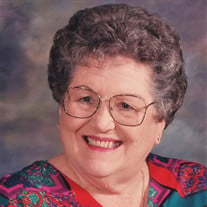 LaVelle (Jackson) Henderson, age 89, died Saturday, May 20, 2017 at Providence Hospice in Harlingen, Texas. She was born August 16, 1927, in Henderson, Texas to Lawrence William and Ara (Haden) Jackson. She was a graduate of Carlisle High School, and received her teacher’s training from North Texas State Teacher’s College in Denton, Texas. Upon receiving her degree, at 19 years old, she moved to the Rio Grande Valley where she began teaching at Hargill Elementary School in Hargill, Texas. She and James Allen Henderson were married at the First Baptist Church in Edinburg, Texas December 20, 1950 and moved to Edinburg. After the birth of their daughter in 1952, Mrs. Henderson began teaching at the newly built Lincoln Elementary School in Edinburg, where she started the Lincoln School Library with books from the George Washington Carver School that had been closed. In addition to being the librarian, she taught classes in many different subjects in the elementary grades. She received her Master’s Degree in Education from Pan American College and continued her teaching career with the Edinburg Consolidated School District for a total of 46 years. After retirement, the Hendersons moved to Alamo Country Club in Alamo, Texas where they maintained an active and diverse social life. Mrs. Henderson moved to Port Mansfield, Texas to be nearer family in 2003 and to Raymondville with her daughter and son in law in 2005. Mrs. Henderson became a resident at Valley View Assisted Living in Harlingen in 2008. Preceded in death by her parents, her husband, and her sister, Adrian Cavender, Mrs. Henderson is survived by her daughter, Jamie Kay Swanberg (Lance) of Rio Hondo, Texas, her granddaughter Brittany Leigh Cornelius (Bryan), her great grandson Tripp Cornelius, great granddaughter Tessa Leigh Cornelius, of Cresson, Texas; her grandson Ronald G. Smith, Jr. (Jennifer), great grandson Tyler James Smith, and great granddaughters Samantha and Jennell Smith, of Alamo, Texas. A private family burial will take place at Valley Memorial Gardens in Mission, Texas, under the direction of Kreidler Funeral Home. In lieu of flowers, memorials may be made in Mrs. Henderson’s name to the American Macular Degeneration Foundation.

LaVelle (Jackson) Henderson, age 89, died Saturday, May 20, 2017 at Providence Hospice in Harlingen, Texas. She was born August 16, 1927, in Henderson, Texas to Lawrence William and Ara (Haden) Jackson. She was a graduate of Carlisle High School,... View Obituary & Service Information

The family of LaVelle (Jackson) Henderson created this Life Tributes page to make it easy to share your memories.