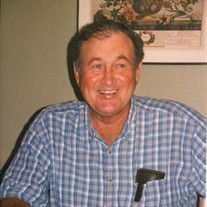 Kenneth Gilbert Skalitsky went to be with our Lord and Savior Thursday morning, July 12, 2018 after a long and courageous battle with Parkinson ’s disease. He was born October 3, 1941 in Ellinger, Texas. The Skalitsky family moved to the Rio Grande Valley in 1942 and settled in Donna, Texas where Kenneth lived the remainder of his life. He is preceded in death by his parents, Adolph and Leera Skalitsky, and his brothers, Leroy Skalitsky, and Oscar Skalitsky. He is survived by his brother, Jimmy (Tricia) Skalitsky of Donna; and sisters, Pearlie (JC) Efird of Alice, Alice Edwards of McAllen, Jolene Neighbors of New Braunfels, Laura (Mark) Johnson of Corpus Christi; and sister-in-law, Betty Skalitsky of Donna. Kenneth has several nieces and nephews. His nieces include Cheryl Riff, Lolly Durso, Kimberly Edwards, Melanie Edwards, Amber Johnson, Laurin Guzman, Lanie Skalitsky, Lindsay Skalitsky, and a great niece, Brynn Skalitsky. His nephews are Robert Efird, Bill Edwards, Terry Skalitsky, James Skalitsky, Larry Skalitsky, Johnny Skalitsky, and Kevin Johnson. He has one great nephew, AJ Tamayo. Kenneth graduated from Donna High School in 1960. He played football for the Donna Redskins for all four years of high school. After his high school graduation, Kenneth left to serve our country in the U.S. Army for two years as a military police officer. When he returned to Donna he was in the Army Reserve. Kenneth was a dedicated and avid Dallas Cowboys fan and rarely missed watching a game. Upon returning to Donna, Kenneth began working in the family’s agricultural farming business, Skalitsky Farms. He was an owner all of his adult life. Kenneth’s life was dedicated to his love for farming and the outdoors. He will always be remembered as a hardworking, kind, soft spoken gentleman, and a devoted brother and uncle. The family would like to extend a special thanks to his devoted caretakers, Juanita Tamez and Veronica Martinez. Visitation will be held a Kreidler Funeral Home on Saturday, July 14th, 2018. His family will be present from 5:00pm to 8:00pm to receive guests. Burial and a graveside service will be in La Grange, Texas on Monday, July 16th, 2018 at the La Grange City Cemetery at 1:30pm.

Kenneth Gilbert Skalitsky went to be with our Lord and Savior Thursday morning, July 12, 2018 after a long and courageous battle with Parkinson &#8217;s disease. He was born October 3, 1941 in Ellinger, Texas. The Skalitsky family moved to... View Obituary & Service Information

The family of Kenneth Gilbert Skalitsky created this Life Tributes page to make it easy to share your memories.

Kenneth Gilbert Skalitsky went to be with our Lord and Savior...