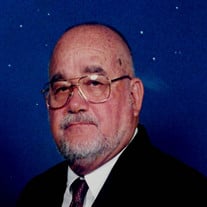 Kenneth (Ken) Albert Myska, loving husband, father, grandfather, and friend, passed from this earth to be with his heavenly Father on June 4, 2016. He was born in Houston, Texas on November 23, 1938 to Albert and Viola (Hafer) Myska. Ken completed high school in Houston, Texas in 1956. After graduation, he joined the United States Air Force and served 2 years of active duty and 4 years of reserve duty. While in the Air Force he received the honor of “Airman of the Year”. In 1958, Ken met and married Virginia (Thompson) Myska, the love of his life. He worked for Stran Steel in Houston, Texas. In 1969, he moved his family to Corpus Christi, Texas where he started his own successful custom metal building construction company. In 1986, he moved to McAllen, Texas and continued in metal building construction. In 1988, he convinced his son to move to McAllen and open a restaurant with him. They purchased Lone Star Barbeque and built it into a successful family business. Ken was a long time member of St. Paul Lutheran Church. Ken was an avid outdoorsman. He loved hunting but water was his passion. He loved fishing, sailing, water skiing or just sitting on his boat. He was an experienced carpenter and craftsman. He could always be found working on a project in his wood shop. By the age of 18 he had built his first boat. He took great pride in teaching his children and grandchildren to enjoy the same passions. Ken is survived by his wife, Virginia Myska of McAllen, TX; his daughter, Cheryl Myska of Corpus Christi, TX; his son and daughter-in-law, Darrell & Ginger Myska of McAllen, TX; his grandson, Lance Myska of Fort Worth, TX; his grandson, Brett Myska of College Station, TX; his brother and sister-in-law, Gary & Dalphine Myska of San Leon, TX; as well as numerous cousins, nieces and nephews. Ken was preceded in death by his parents, Albert and Viola Myska. There will be a reception immediately following the service in the church fellowship hall. In lieu of flowers, donations can be made to St. Jude’s Children Hospital and the Wounded Warriors Project.

Kenneth (Ken) Albert Myska, loving husband, father, grandfather, and friend, passed from this earth to be with his heavenly Father on June 4, 2016. He was born in Houston, Texas on November 23, 1938 to Albert and Viola (Hafer) Myska. Ken completed... View Obituary & Service Information

The family of Kenneth "Ken" Myska created this Life Tributes page to make it easy to share your memories.