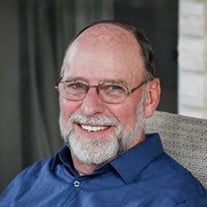 Kenneth Glenn DeJarnett joined Jesus in Heaven’s glorious throne room on Wednesday, March 24th. As a passionate, born again, Christian, Ken was reunited with his parents Major “Mike” Silas DeJarnett and Naomi Rieff DeJarnett. Services to honor Ken’s life will be held at Kreidler Funeral Home on Saturday, March 27th at 3:00. Ken was born on August 30th, 1947, in Lubbock, Texas and earned his degree in Political Science and Government from Texas Tech University. Ken moved to Dallas, Texas and later Rockwall, Texas where he had a distinguished career as a Real Estate Developer and Broker, where he was honored to serve as Board Chairman of the Texas Housing Agency and President of the National Association of Homebuilders. Ken later moved to McAllen, Texas where he married Brenda Lopez. He continued his career in Urban Planning and Development in the Rio Grande Valley with several notable developments and Board memberships. Ken brought his optimism and love to all aspects of his life and was a devoted husband, father and grandfather. Please join those remembering Ken’s legacy, including his wife, Brenda Lopez DeJarnett of McAllen, Texas; his son, Brian and Christa DeJarnett of Irvine, California; his daughter, Nicole and Matt Hobson of Houston, Texas; his stepson, Devin Lewis of Seattle, Washington; his brother, Don and Sandra DeJarnett of Hale Center, Texas and his 3 grandsons, James, Jacob, and Jack Hobson of Houston, Texas. In lieu of flowers, the family has asked for donations to be made to honor Ken at the Sanctuary of Hope, in San Antonio, Texas or to The Gideons International. For Sanctuary of Hope, please send a check payable to Cornerstone Church with Ken DeJarnett in the memo. Cornerstone Church; 18755 Stone Oak Parkway; San Antonio, TX; 78258.

The family of Kenneth Glenn DeJarnett created this Life Tributes page to make it easy to share your memories.