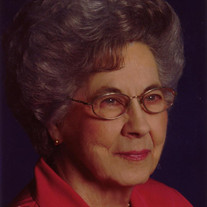 Katie Frances Woodruff Beane passed away on April 30, 2020 in Edinburg, Texas at the age of 100. Born in San Antonio on August 18, 1919 to Benjamin Franklin Woodruff and Carrie Cornelia Higgins Woodruff, she was the youngest of five children. Katie Frances graduated from South San Antonio High School in 1937 and received her Bachelor of Science in Vocational Home Economics from Texas A&I in Kingsville in 1941. Her Masters in Elementary Administration was obtained from Texas A&I in 1965. After graduating college in May, Katie moved to Edinburg and took her first job, Assistant Home Management Supervisor with the Farm Home Administration, U.S. Department of Agriculture. Her office was one block from the post office in Edinburg where she was sent to be finger printed as part of the government requirements. There she met her future husband, William Edward Beane, the postal employee who had been assigned the day’s fingerprinting duties. They were engaged by August and married in November. World War II broke out in December. As an educator, Katie served the children and teachers of south Texas in many capacities. In 1947 she opened a play school in the Edinburg Methodist Church for 2-5 year olds. At one point there were 29 children in the half day school. The school closed in December of 1948 when more than half the children came down with measles. Mrs. Lorraine Braden was able to successfully reopen in a new location and it was called The Little Red Schoolhouse for the next 25 years. Next was her experience as a Junior High English teacher in Edinburg. This was her entry into public school work for the next 34 years. In the Pharr-San Juan-Alamo ISD she served as Food Service Director beginning in 1952. After obtaining her Master’s degree, Katie was principal at Clover Elementary, D.U. Buckner Elementary and Henry Ford Elementary. For three years she was PSJA/Pan American Teacher Center Coordinator and also served as Elementary Curriculum Director for all the elementary schools in PSJA. Katie retired in 1981, returning in 1991 to serve as principal of St. Matthew’s Episcopal School in Edinburg for eight years. She retired for the second time at the age of 80. Ed and Katie had four daughters: Susan Beth Hancock (Mike), Barbara Jo Serota (Tom), Virginia Kay Meyer (Charlie), and Margaret Ann Martin (Kenny). There are seven grandchildren: Kelly Meyer Martin (Jim), Ryan Meyer (Sarah), Mark Hancock, Scott Serota (Thomas), Susan Serota Alexander (Aaron), J.D. Martin (Kacey), and Carrie Martin Fearn (Arvelle). Great-grandchildren are Jack, Phoebe, Reese, Landon, Rowan, Charley, Emerson, Barrett, Hadley, Kade, Aviana, and Benjamin. Katie was the loving and always supportive matriarch of the family. Her 85th, 90th, 95th, 98th, and 100th birthdays were celebrated with family reunions. She delighted in her grandchildren and great grandchildren. After Ed died, she lived with Margaret and her family for 28 years. Katie had a marvelous memory and at the request of her daughters she wrote, by hand, nineteen stories about her life experiences to share with the whole family. These stories were windows into the Greatest Generation which she represented so well. In 2011 Katie was honored at the Delta Kappa Gamma State Convention for her 50 years of membership as part of Rho Chapter in Edinburg, She was a member of the First United Methodist Church in Edinburg for over 60 years. Katie was preceded in death by her parents, her sister, Nina Beth Jennings, her brother, Walter Woodruff, her brother, David Woodruff, and her sister, Frankie Woodruff. She was also predeceased by her husband of 46 years, Ed Beane. The family wishes to convey their deepest appreciation to the staff of The Bridges of Edinburg for their loving care. Mother participated fully with staff and residents in her years at the Bridges and made lasting friendships. The family also wishes to thank the dedicated women who attended mother every single night over the last two years. And lastly, thank you to the Legacy Home Health doctor and nurses who provided excellent hospice care to Mother and support for the family. Because of the Covid-19 pandemic a private family burial will be held. When all our lives return to normal, we hope to have a celebration of life with family and friends. The family welcomes memorials in Katie’s name be sent to Edinburg First United Methodist Church at 3707 W. University, Edinburg, TX 78541 or the charity of their choice.

Katie Frances Woodruff Beane passed away on April 30, 2020 in Edinburg, Texas at the age of 100. Born in San Antonio on August 18, 1919 to Benjamin Franklin Woodruff and Carrie Cornelia Higgins Woodruff, she was the youngest of five children.... View Obituary & Service Information

The family of Katie Frances Beane created this Life Tributes page to make it easy to share your memories.