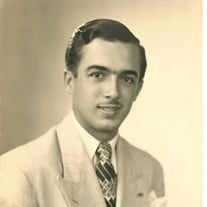 Juan Salcines, 88, born on December 28, 1927, entered into eternal rest on October 10, 2016 in McAllen, Texas. Juan was born in Jovellanos in the Province of Matanzas, Cuba to Juan Salcines and Josefa Crego de Salcines, both Spaniards who had immigrated to Cuba in the late 1800s. His youth was spent helping his father work the three ranches his family owned. Juan attended Candler College, where he ran track and played baseball. He graduated with a Business degree, but played professional baseball with the Tres Estrellas Team for three years before he started working at the Havana National Bank as a Senior Loan Officer. He met his wife Carmen while attending classes in college, and they married in 1950. In 1961 as he had often done in previous years he took his wife and children to Miami on vacation, but this time he asked for political asylum. In Miami he held three jobs to support his family. He worked as a milk man, as a mechanic in the Miami airport, and as an electronics salesman. In 1966 he moved to McAllen with his family and opened International Stores. He and his partner would eventually open 14 stores on the border from Brownsville to El Paso. Juan loved to play racquetball and played competitive into his late sixties. He and his wife loved to fish and spent many years after their retirement at their beach house in Port Isabel. Our parents were the example of what you can accomplish with hard work and determination. They attained the American dream, and lived a long and wonderful life. Juan was preceded in death by his parents Juan Salcines and Josefa Crego de Salcines, his brother Jose (Cheo) Salcines, grandson Josh Brandt Salcines, and his loving wife of 63 years Carmen Losada de Salcines. He is survived by his sons Juan Salcines Jr. (Pamela) of Port Lavaca, Texas and Jorge Salcines (Maria Luisa) of McAllen, Texas; grandsons Jace Salcines (Sabrina) of Hallettsville, Texas, Jake Salcines, of Corpus Christi, Texas, Jorge Salcines Jr. (Lucia) of McAllen, Texas, Carlos Salcines (Sarah) of Los Angeles, California, Maelia C. Salcines of McAllen, Texas; great grandchildren Samuel Salcines, Jorge Antonio Salcines, Juan Carlos Salcines of McAllen, Texas; his niece Berta Salcines Jaffe (Jorge Lazaro) and children Alexander and Skye of Charlottesville, Virginia. The family would like to thank Ciri, Salomon, and Rogelio for the love and care they provided Juan, and Amara Hospice, the nurses, and dedicated staff who made it possible for our father to die peacefully at home. We will be forever grateful for the loving care and kindness they showed our father, and our family during this difficult time. A funeral service will be held on Thursday, October 13, 2016 at 10 a.m. at Kreidler Funeral Home, burial will follow at Roselawn Cemetery.

Juan Salcines, 88, born on December 28, 1927, entered into eternal rest on October 10, 2016 in McAllen, Texas. Juan was born in Jovellanos in the Province of Matanzas, Cuba to Juan Salcines and Josefa Crego de Salcines, both Spaniards who had... View Obituary & Service Information

The family of Juan Salcines created this Life Tributes page to make it easy to share your memories.