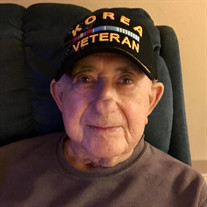 Juan Jose (J.J.) Rodriguez, 90, entered into eternal life on Sunday, March 8, 2020, at Alfredo Gonzalez Texas State Veterans Home in McAllen, Texas. He was preceded in death by his parents, Serafin and Esperanza Rodriguez, wife Sylvia Marroquin Rodriguez, grandson Dominic Alexander Rodriguez, and sister, Oralia R. Callahan. He is survived by son David (Elizabeth) Rodriguez, John (Alejandra) Rodriguez, daughter Judith (Scott) Henry, sister Consuelo Gonzalez, brother Ramon Rodriguez, grandchildren Julian, Joel, Matthew, and Isabella Rodriguez, as well as numerous nieces and nephews. J.J. was born in McAllen on March 9, 1929. He attended McAllen High School and proudly served in the United States Navy during the Korean War, having been stationed in California, Alaska, and Japan. After graduating from then-Pan American College, he began a teaching career that spanned the next 40-plus years, most of which were spent at Edinburg High School. “Mr. Rod,” as he was called by his students, was a beloved science teacher known for his intelligence, enthusiasm, and sense of humor. One of his greatest joys as a teacher was coaching and sponsoring several successful UIL and Academic Decathlon teams, and he cherished the countless weekends spent with his students taking them to compete in contests all across the Valley and the state. He passed on his love of learning to hundreds of students and shared his passion for teaching with the numerous student teachers that he mentored and guided throughout his career. He married Sylvia in 1964 and was a loving and dedicated husband. After the prolonged battle with Guillain-Barre Syndrome that led to her passing in 1982, J.J. then devoted himself to serving as both father and mother to his three children. He always put the needs of others before his own, and his faith, patience, and perseverance carried him through many of life’s difficulties. He was a quick wit who liked to make others laugh and smile; even as his illness advanced, his sense of humor never faded. He has left behind so many treasured memories of love and laughter, but his greatest legacy is the example of gentleness, generosity, and self-sacrifice that have left an indelible mark on his children and grandchildren. The family would like to express its heartfelt gratitude to the nurses and staff of both the Alfredo Gonzalez Texas State Veterans Home Memory Support Unit and Allstate Hospice for the attentive care and compassionate support provided to their beloved father. There will be a visitation from 5:00 p.m. to 8:00 p.m. on Friday, March 13th, at Kreidler Funeral Home in McAllen, with recitation of the Holy Rosary for the repose of his soul at 7:00 p.m. The funeral Mass will be held at 9:00 a.m. the following day, March 14th, at Our Lady of Sorrows Catholic Church, also in McAllen. Interment will follow immediately after the funeral at Valley Memorial Gardens.

The family of Juan Jose Rodriguez created this Life Tributes page to make it easy to share your memories.