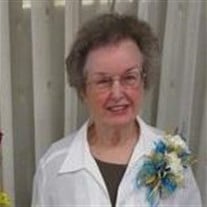 Joyce Dean Hicks Payne journey on earth ended on December 3, 2018. She was 86 years old, born to William Preston & Ruby Violet Hicks in Smackover, AR. She was a middle child and although times were often hard, she carried with her many cherished memories and formed early friendships that lasted throughout her life. She was a true beauty inside and out and married a handsome guy named Sidney Payne Jr. on October 19, 1950 in Delhi, LA; they had been married 68 years. Soon after that Sidney was drafted into the Korean War and Joyce served alongside of him by moving many times, setting up new homes, getting new jobs and making new friends. These were tough but wonderful times. In 1953, Joyce & Sid began their Sun Oil Company career. In 1963 she, Sidney and their three girls moved to McAllen, TX. In May 1967 Joyce received her Education degree from Pan American (UTRGV). Joyce especially loved teaching students receiving Special Education services and retired from McAllen ISO in 1991. She received many letters she cherished from previous students thanking her for loving, teaching and making them feel special over her 30-year teaching career. Joyce was an active member of Calvary Baptist Church in McAllen for over 50 years. She lived and raised her precious family for 47 years in that wonderful home on Fern Avenue. Joyce was fun, smart and loving to her family and many close friends. Our mother would open the door and greet us with the best hug and kiss every time we went home for a visit. In 2012, she and Sidney moved to John Knox Village in Weslaco, TX to live out the final chapter of their beautiful book together. Joyce was and will forever remain a remarkable blessing to her many friends and "The Queen Grandmother" to her family. She loved her family with her whole heart and our concerns, endeavors and delights were her concerns, endeavors and delights. It was most important to our mother and grandmother for all of her family to know Jesus Christ as their Lord & Savior. She was a wonderful wife, mother, grandmother, great grandmother, sister and friend. Joyce was a Godly woman that we will greatly miss. Joyce was preceded in death by her parents and sister, Betty Jane Hicks, brother Terry Allen Hicks. She is survived by her loving husband, Sidney L. Payne, Jr., and three wonderful daughters and sons-in-law, Vicki Rainwater (Jack), Kathy Phillips (Cody) & Rebecca Macha (James). Four grandchildren, Elizabeth Baggs (Adam), Rebecca Galvan (Danny), Wilson Macha & Sydney Macha; five great grandchildren, Parker & Preston Galvan, & Anna, John & Wyatt Baggs. Graveside Services will be held Thursday, December 6, 2018 at 10 AM at Roselawn Mausoleum Chapel. A Funeral service will be Thursday December 6, 2018, 2:00 PM. at John Knox Village Chapel. The family request that contributions be made to C.A.M.P. University, P.O. Box 2294, McAllen, Texas 78502-2294 or the First Baptist Church, 600 S. Kansas, Weslaco, TX 78596 in lieu of flowers.

Joyce Dean Hicks Payne journey on earth ended on December 3, 2018. She was 86 years old, born to William Preston & Ruby Violet Hicks in Smackover, AR. She was a middle child and although times were often hard, she carried with her many cherished... View Obituary & Service Information

The family of Joyce Dean Hicks Payne created this Life Tributes page to make it easy to share your memories.