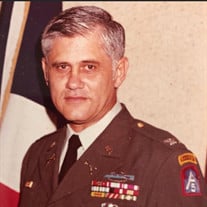 The rock of our family, proud American veteran, father, grandfather, great-grandfather, and friend to everyone he met, departed this world and went home to be with his Lord and Savior, Jesus Christ, and the love of his life, his beloved late wife, Norma C. Trdla, on Friday, March 25, 2022, at 89 years of age. Words cannot express the enormous void he leaves behind so soon after losing our mother. The best of our father will live on in us as we learn to live life without him. His legacy will continue in us, his children, and our children. The hope we have in Christ guarantees us that we will see him again one day. His leadership, character, perseverance, integrity and kindness only begin to express the man he was and is. Joseph “Bob” was born on January 12, 1933, in Mission, Texas, to Joseph Benjamin and Maria Antonia Trdla. He was the youngest of four siblings: Lilly Guerra, Ray Trdla, and Lita Haider, all of who were amongst the many who welcomed him home to heaven. He married his bride, the love of his life, Norma on 12/27/58, and were blessed with 63 wonderful years of marriage. Bob leaves behind two sons: Edward and John Trdla; two daughters, Teresa Trdla; Monica Guajardo and her husband, Dan; 5 grandchildren: Cristina, Jose Daniel, Diana, Rebekah, and Daniel; and two great-grandchildren: Liam Alexander and Mila Sofia. Bob attended Mission High School, and continued his education at St. Mary’s University on a baseball scholarship. He later transferred to Texas A&I and graduated with a degree in Industrial Arts. He joined the United States Armed Forces in 1957, was commissioned into the United States Army as a 2nd Lieutenant and later assigned to Berlin, Germany. From there, he proposed to Norma (long distance) who then flew 5,477 miles to wed her soldier. Bob had an extensive military career earning the distinction of Airborne Ranger, Paratrooper, and Infantry man. Among his many notable awards are the Combat Infantry badge, four Bronze Stars, and the Defense Superior Service Medal. He served two tours of duty in Vietnam. Bob traveled the world with his wife and family, later retiring after 30 years of dedicated service to his country as a full bird, Colonel. Bob’s passion was to his wife and children, and grandchildren. Family was everything to him. To truly memorialize him is impossible; but anyone who knew him can attest to the good, honorable, honest, humble, loving and Godly man he was - always putting others ahead of himself; a true servant leader who changed this world for the better. Please join us for a Rosary that will be held in his honor on Thursday, March 31, 2022 at 7:00PM, at the Kreidler Funeral Home Chapel, located at 314 N. 10th St., McAllen, TX, 78501. The mass for Bob will be held on Friday, April 1, 2022 at 10:00AM, at Our Lady of Sorrows Church. Burial will be at 1:00PM, at State Veterans Cemetery, 2520 South Inspiration Road, Mission, TX 78572. We invite you to join us in Bob’s celebration of life, and as an extra display of honor and to see him off, please incorporate patriotic or military colors into to your attire. Bob was a true PATRIOT and loved his country.

The rock of our family, proud American veteran, father, grandfather, great-grandfather, and friend to everyone he met, departed this world and went home to be with his Lord and Savior, Jesus Christ, and the love of his life, his beloved late... View Obituary & Service Information

The family of Joseph R. Trdla created this Life Tributes page to make it easy to share your memories.

The rock of our family, proud American veteran, father, grandfather,...