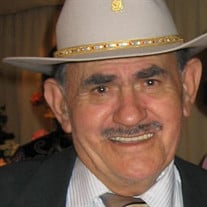 Jose Guadalupe Sanchez, age 93, a long-time resident of McAllen passed from this life into God's loving arms on February 6, 2022. He was lovingly known as "Pino" to his family and friends. Mr. Sanchez was born on December 28, 1928 in McAllen, Texas. He was the 9th of 11 children born to Marta Montemayor Sanchez and Manual Sanchez. He is preceded in death by his parents, brothers Baldemar Sanchez and Joe A. Sanchez and sisters Maria Luna, Olivia Moreno, Natividad "Tiva" Sanchez and Minerva "Minnie" Solis Longoria. Sisters Margarita and Paulita and brother Jacinto died in infancy. He is survived by one sister, Catalina Sanchez Ramirez of Lubbock, Texas as well as many nieces and nephews in California and Texas. Mr. Sanchez was a proud U.S. Army veteran. He served his country during the Korean Conflict and was awarded the Korean Service Medal with one Bronze Service Star and the Combat Infantry Badge. He proudly wore pins on his shirt lapel and on his hat displaying his membership and support of both the Disabled American Veterans and the Veterans of Foreign Wars. In McAllen, he was like a one-man parade as he drove his small blue car through the streets each day with American flags proudly waving from each rear window. Mr. Sanchez enjoyed people and spent his career in the service industry. He began as a busboy in 1949 at the Mayfair hotel in Los Angeles, California. In 1951 his life was detoured by the Korean conflict and he was drafted into the Army at 23 yrs. of age. Upon completing his military tour in late 1953 as a Corporal, he returned to Los Angeles, CA. where he would work as a waiter at the famous Cocoanut Grove Club known for its clientele of Hollywood celebrities, like Elizabeth Taylor. He was a self-taught man and loved to read. "Pino" had an entrepreneurial spirit and he would eventually become a co-owner of a club for almost a decade. In the early 1970's, Mr. Sanchez returned to his hometown of McAllen where he helped his older sister, Natividad "Tiva" care for their elderly mother until she passed. In time, he would become a caretaker for his sister "Tiva" in her final days as well. "Pino" Sanchez was a devoted brother and uncle. He was known for his kindness and generosity among family and friends. "Pino" will be greatly missed by all who loved him. The family wishes to acknowledge and thank nephews Frank Luna Jr., Richard Luna and Gerald Solis for the extra time and care that they unselfishly gave to "Uncle Pino" in his final years. Visitation will be held at Kreidler Funeral Home in McAllen, Texas on Thursday, February 17, 2022 beginning at 5PM Followed by a Rosary at 7PM. A Catholic Mass will be held on Friday, February 18, 2022 at Our Lady of Sorrows Catholic Church at 10AM. Burial services will be at the Rio Grande Veterans Cemetery in Mission, Texas at 1 PM. A special thanks to the doctors and staff of McAllen Heart Hospital and the staff of Concord Hospice and The Bridges at Edinburg for their kindness and compassion.

Jose Guadalupe Sanchez, age 93, a long-time resident of McAllen passed from this life into God's loving arms on February 6, 2022. He was lovingly known as "Pino" to his family and friends. Mr. Sanchez was born on December 28, 1928 in McAllen,... View Obituary & Service Information

The family of Jose Guadalupe "Pino" Sanchez created this Life Tributes page to make it easy to share your memories.