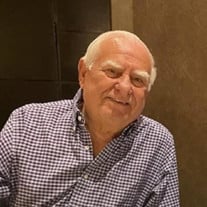 Jose Angel Guerra Jr., was born December 24, 1937 in Edinburg, Texas. On June 4, 2022, he passed away at home surrounded by family in Pharr, Texas at the age of 84. Jose was the son of Jose Angel Guerra Sr. and Julia Guerra. He married Sylvia Flores on October 13, 1961 and they remained married for over 55 years until her passing in 2017. Together, they raised 3 children with tender love and affection. Jose attended Edinburg High School and went on to serve in the U.S. Army. When he returned home, he was employed at JC Penney’s as the Service Manager of the Automotive Center. After its closure, he opened Joe’s Auto Service in McAllen. Guero, as he was known to many, continued to help his extended family and some of his most loyal clients with their auto issues long after his retirement. He enjoyed working with his hands and was adamant about doing things on his own. He was happiest when he was around his children and grandchildren, and loved to spoil his great grandchildren. He loved quiet afternoons on his favorite swing reminiscing of his younger years at the ranch with his family. Jose was preceded in death by his wife Sylvia Flores Guerra, his parents Jose Angel and Julia Guerra, his sister Maria Estefana, and his brother Jesus Alejo. He is survived by his brother Jose Arnoldo (Martina), his sisters Alicia Elidia Tijerina (Salvador +) and Socorro Lucio (Roberto). He is also survived by his three children: Jose Angel Guerra III, Maria Teresa Ramirez (Michael), and Sylvia Iris Ornelas (Albert); eight grandchildren: Samantha Jo Rodriguez (Alberto), Madeline Ramirez, Miguel Ramirez, Mario Ornelas, Jaqueline Ornelas, Andrea Ornelas, Sophia Ornelas, Daniella Ornelas; and three great grandchildren: Natalia Rodriguez, Alberto Rodriguez Jr., and Daniela Rodriguez. Jose will be laid to rest at the Rio Grande Valley State Veterans Cemetery in Mission, Texas. Miguel Ramirez, Mario Francisco Ornelas, Luis Flores III, Jaime Flores, Salvador Tijerina, Jr., and Alberto Rodriguez will serve as pallbearers. The family would like to thank Hospice Compassionate Care, Dr. Jose Lopez, his nurses Hugo Garcia, Martha De La Garza, and his caregivers Annabelle Paris and Omar Rodriguez. The family would also like to give a special thank you to Fina Miranda, who became part of the family after dedicating years caring for both Sylvia and Guero. They would also like to thank St. Margaret Catholic Church: Rev. Raymond Nwachukwu (Pastor), Gilda Rodriguez and Leyda Guajardo (Homebound & Sick). Visitation will be on Thursday, June 9, 2022 from 4:00 – 8:00 pm. at Kreidler Funeral Home in McAllen, with a rosary at 7:00 pm. Funeral mass will be held on Friday, June 10, 2022 at 9:30 am Saint Margaret Catholic Church in Pharr, Texas. Interment will follow at Rio Grande Valley State Veterans Cemetery in Mission, Texas. Funeral arrangements are under the care of Kreidler Funeral Home of McAllen. In lieu of flowers, the family asks that donations be made in his name to Saint Margaret Catholic Church in Pharr.

Jose Angel Guerra Jr., was born December 24, 1937 in Edinburg, Texas. On June 4, 2022, he passed away at home surrounded by family in Pharr, Texas at the age of 84. Jose was the son of Jose Angel Guerra Sr. and Julia Guerra. He married Sylvia... View Obituary & Service Information

The family of Mr. Jose Angel Guerra Jr. created this Life Tributes page to make it easy to share your memories.