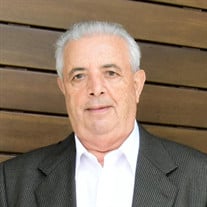 Jose (Pepe) Arias, 85, passed away peacefully on April 23, 2021, surrounded by his family. He is survived by his wife of 58 years, Amalia, his daughters Ani (Jorge) de Alba and Lilly Arias, two granddaughters, Priscila and Natalia de Alba and his sister, Esther Arias. He is preceded in death by his parents, Benjamin Arias and Benjamina Rey and sister, Edelmira Arias. Jose was born in Asturias, Spain. At the age of 15 he immigrated to Cuba where he later met and married his dear wife, Amalita. It was there that he learned his unique dancing skills and developed his contagious laughter that would resonate throughout every gathering he attended. Dictatorship in Cuba took every penny he made, but he maintained his enthusiasm for life and his conviction that hard work and discipline would guide him toward a successful, fulfilling future. He returned to Spain for a few years before coming to the United States and settling in McAllen in the late 1960’s. Once again, his hard work and determination was evident as he started over in a new country and thrived. His diligence afforded him a career in the fabric business, where he owned and operated La Campana Fabric Store in downtown McAllen for 44 years. Jose was a generous, kind man who was always willing to help someone in need. This virtue made him a friend to many and loved by all who met him. “Never leave for tomorrow what you can accomplish today” was one of his favorite sayings. He most enjoyed spending time with his family, surprising loved ones at birthday parties or being there for someone in their time of need. These acts of love, kindness and generosity should serve as a heartwarming memory for us all. In honoring his life, we should live each day in the present, to our greatest potential. Visitation will be Monday, May 3 from 3-7pm with a rosary at 7pm at the funeral home. Funeral mass will be Tuesday, May 4 at 10 a.m. at Our Lady of Sorrows Catholic Church, with burial to follow at Valley Memorial Gardens Cemetery.

Jose (Pepe) Arias, 85, passed away peacefully on April 23, 2021, surrounded by his family. He is survived by his wife of 58 years, Amalia, his daughters Ani (Jorge) de Alba and Lilly Arias, two granddaughters, Priscila and Natalia de Alba and... View Obituary & Service Information

The family of Jose (Pepe) Arias created this Life Tributes page to make it easy to share your memories.