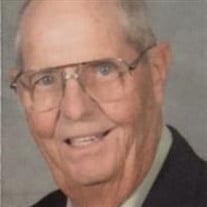 Alamo: John Albert Wiebelt, 88, of Alamo, Texas passed away on Wednesday, December 2, 2015. He was born in Akron, Ohio on June 7, 1927 to Albert Wiebelt and Ruth (Kuhn) Wiebelt. He married Gladys Ruth Haynes on May 23, 1950. He served in the United States Navy. He earned a Masters from SMU and a PhD from Oklahoma State University where he was a professor of Mechanical and Aerospace Engineering. John is survived by his wife, daughter Ruth Sutton and her husband Keith of Miami, Oklahoma, his son Robert John Wiebelt and wife, Shannon of Crescent, Oklahoma, grandchildren Jacob Sutton and his wife, Annie, Charisse Soriano, and her husband Alberto, Christina Wiebelt and her fiancé Ryan Huckey, Jason Wiebelt, and Kimberly Wiebelt and great grandchildren Aiden, Austin, Sarah, Lillie, and Elijah. John was extremely generous and he supported his children and grandchildren in achieving educational goals. One of his students said "Dr. Wiebelt opened the door of learning and I walked through". He had a kind and gentle way of dealing with the challenges of raising his two children. He was often a man of few words but those words were always full of wisdom and love. Flying and making pottery were two of his many passions. He built and flew his own airplane for which he hand carved several propellers. His pottery is found in many kitchens of his friends and family. He will be missed by so many. Memorial service will be held at 3:00 Tuesday, Dec. 8, 2015 at Alamo Country Club. In lieu of flowers donations may be made to the Salvation Army, 1600 N. 23rd St., McAllen, TX

The family of John Albert Wiebelt created this Life Tributes page to make it easy to share your memories.

Alamo: John Albert Wiebelt, 88, of Alamo, Texas passed away on...