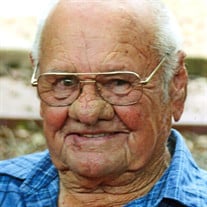 John (Johnny) Eldren was gently welcomed into Heaven on June 20, 2016. He was born on November 18, 1925 in White Deere, Texas to John and Florence Pawlik. John honorably served his country after the attack on Pearl Harbor. He hitchhiked all the way to San Antonio’s U.S. post office to join the US Navy as an LCM (Landing Craft, Mechanized Vehicle) driver. Johnny later returned to the Valley in order to attend Edinburg Junior College and The University of Texas where he pursued a degree in Pharmacy. He was then called home to help with the family farm; which was started originally with very little money by his parents. The children even went to drastic measures as to drinking Holy Water in order to stay hydrated and cramming into the bed of a pick-up truck to get around the farm. Johnny passionately embraced the farm life for the remainder of his time on Earth. He partnered with his brother, Louis, and ran an incredibly successful farming business for over 70 years. The family farm continues to be run, successfully, by his nephew Jimmy Pawlik. John was very active within the community. Some of his services include: Director of Gulf Compress for 20 years, Director of Edinburg Citrus Association for 10 years, and the Director of Texas Citrus Exchange. He also held the positions of President of Hidalgo County Farm Bureau, United Irrigation District, as well as San Juan Farmers Co-Op. Within the church, Johnny was an active member of our Lady of Sorrows Men’s Club, the Knights of Columbus, El Jeffe De Los Ushers, as well as a member of the Liturgy committee. He is preceded in death by his wife of fifty-two years, Marianne Bell Pawlik; his parents John and Florence Pawlik and brothers, Chester, Louis, and sister, Lillian. He is survived by his brothers, Dan, Emil, Wilfred, Bobby Pawlik and sister, Mary Louise Johnson. His three devoted daughters, Pauline E. Pawlik of McAllen, Sandra Pawlik Gonzalez of College Station and Virginia Pawlik Dernehl of Sugar Land; his supportive and loving sons-in-law, Robert Gonzalez and Richard Dernehl; and the lights of his life, his granddaughters, Kayla and Leah Gonzalez and Anneliese, Victoria and Allyson Dernehl. Johnny will always be remembered for his loving devotion to God, his family, friends, and farming; which is more than 90 years of his lifetime. He will be sorely missed and eternally beloved by all who knew him. Pall bearers will include: Will R. Pawlik of McAllen, TX, Battle Bell IV of New Orleans, LA, Jimmy Pawlik of Pharr, TX, Jim Johnson of Bedford, TX, Tim Pawlik of Houston, TX and Randall Pawlik of Austin, TX. Viewing for John Eldren Pawlik will be held on Monday, June 27, 2016 from 5-7 PM with the recitation of The Rosary at 7:00 PM at Kreidler Funeral Home 314 N. 10th St. McAllen, Texas 78501. The burial Mass will be held at 10 AM Tuesday, June 28 at Our Lady of Sorrows Catholic Church 1108 W. Hackberry Ave. McAllen, Texas 78501, burial to follow at Valley Memorial Gardens Cemetery.

John (Johnny) Eldren was gently welcomed into Heaven on June 20, 2016. He was born on November 18, 1925 in White Deere, Texas to John and Florence Pawlik. John honorably served his country after the attack on Pearl Harbor. He hitchhiked all... View Obituary & Service Information

The family of John Eldren Pawlik created this Life Tributes page to make it easy to share your memories.

John (Johnny) Eldren was gently welcomed into Heaven on June...